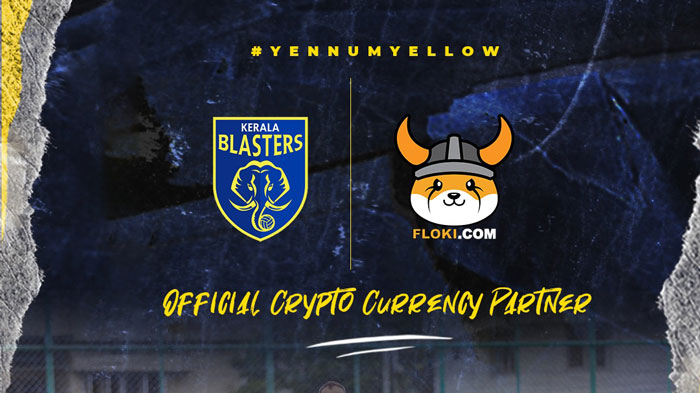 Kerala Blasters FC is delighted to announce its association with Floki, one of the leading crypto coins, as its sleeve sponsor for the upcoming season of the Hero Indian Super League (ISL).

The partnership forms a part of a global promotion that sees Floki being heavily advertised around the world. As a part of its association with Kerala Blasters, the Floki logo will find its place on the Right Sleeve of Kerala Blasters FC’s jersey for the upcoming Hero ISL season.

“We are proud to sign a partnership with Floki, showing we are leading the way in innovative partnerships. This helps to keep the club up with the ever-happening changes in the world. We look forward to a great association together,’ said Nikhil Bhardwaj, Director, Kerala Blasters FC.

“Floki and football go hand in hand with each other because this is the people’s cryptocurrency. Floki is a “movement” and aims to be the most known and most used cryptocurrency in the world. The Blasters are a huge club and we are honored to be partnering with them,” said spokesperson of Floki.

Floki is also known for its good cause work and has a vision to build a school in every continent and eventually in every underdeveloped nation of the world. To kickstart this vision, Floki has formed a strategic partnership with Pencils of Promise which is a non-profit organisation that builds schools and increases educational opportunities in the developing world. They have built 575 classroom blocks that are currently serving over 115,000 students in various nations of the world.

This partnership will further include the brand being displayed on the LED at all home matches along with other fan focused promotional assets.