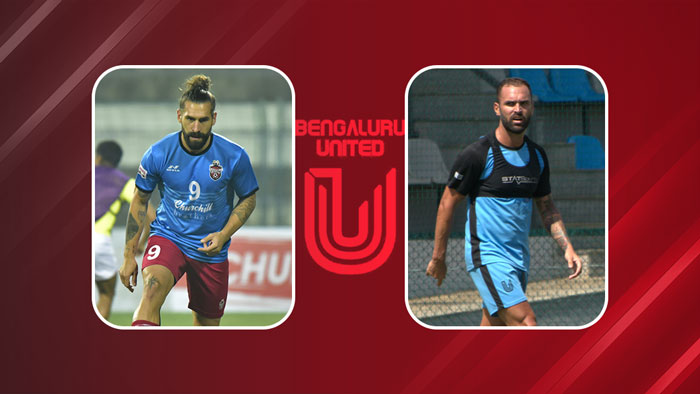 Ahead of the upcoming domestic season, BDFA Super Division Champions FC Bengaluru United (FCBU) have signed Luka Majcen and Pedro Manzi, as the club looks to add additional firepower to its attack for the upcoming domestic season. The foreign duo’s first assignment for the club will be the Durand Cup. The tournament begins in Kolkata next month and FCBU are one of the 16 teams invited to participate in it.

The 32-year-old Slovenian forward Luka Majcen joins FCBU as a free agent, following a one-season stint with Churchill Brothers in last season’s I-League. Majcen finished the I-League season with an impressive return of 11 goals; a tally which saw him finish second in the Golden Boot race in the league. He also registered two assists to go with his 11 goals. Before his entry into the Indian domestic football circuit in 2020, Majcen plied his trade in Slovenian football, representing a number of top clubs in the region. He is a two-time winner of the Slovenian Cup, which is the top knockout tournament in Slovenian football.

“I am delighted to join FC Bengaluru United for the new season,” Majcen said. “The club has a clear goal and vision about where they see themselves in the coming years – which is to be playing in the I-League. My objective is to help the team win and achieve this goal together with my new teammates. I am excited about the opportunity and am looking forward to working with Head Coach Richard Hood, whose reputation as one of the sharpest coaches in Indian football precedes him,” said Majcen.

Luka Majcen will be looking to form a partnership in attack with fellow new signee Pedro Manzi. Manzi took Indian football by storm in his debut season with Chennai City FC in the 2018-19 I-League. The Spanish forward finished that season as the Golden Boot winner in the I-League with 26 goals. His exploits led Chennai City FC to the I-League crown that season, and FCBU will be hoping that their new recruit will be able to recreate his goal scoring form from that particular season.

“I am very happy to return to India and play for FC Bengaluru United. Bengaluru has a great sporting culture, and the fans really support their team. I would like to use all my career experience to help the team grow, whether it is with my offensive tactical play, assists for goals and also the way I apply pressure with my defensive skills,” Manzi said. “Being part of the FC Bengaluru United journey will help me in my own professional journey. I was excited to accept this challenge and look forward to playing a leading role in guiding the club to the I-League. The club has seamless processes in place and has enjoyed a great growth journey over the last few years – the results are there for all to see. So, it was very easy for me to accept the offer after speaking to their head Coach, Richard Hood and General Manager, Somanna CS,” Manzi said.

“With 2 foreign players allowed on the pitch there was a lot of effort behind the analysis that went into identifying and securing our prime targets for our promotion bid,” said Richard Hood, Head Coach, FC Bengaluru United. “In Luka we have a thorough team player who brings a lot of hunger, intensity and ferocity with every minute that he is involved in. There is a tremendous work ethic and desire to win that complements our playing style from the front both on and off the ball. His efforts are sure to get us a lot of goals. Pedro is lethal in the final third of the pitch and has proven that with plenty of conviction in two campaigns of the I-League. Apart from his scoring and high assist track record – we recognised his strong play making abilities around which we have built a squad that will control the game and progress the attack with pace and precision.”