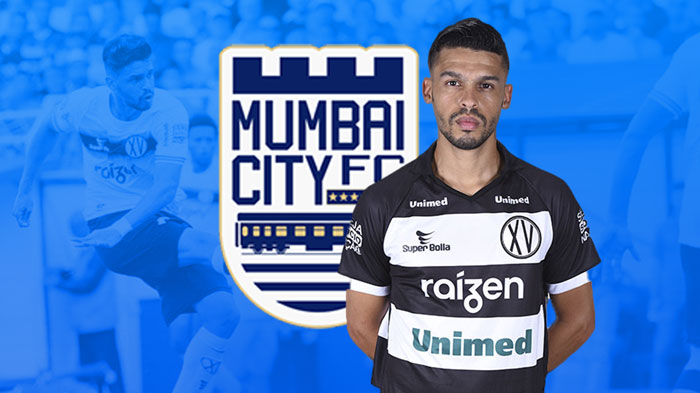 Fondly known as ‘Cássinho’, the 29-year old started his youth career at Fluminense’s under 20s side and went on to play for a number of Brazilian clubs such as Paysandu SC, Bento Goncalves, Guarani, Anapolis, ASEEV-GO, Penapolense, Piracicaba, Sao Bento, Botafogo and Mirassol before joining Vila Nova in June 2020. Cássio, who can play on either wings or through the middle as an attacking mid, made 12 appearances for Vila Nova and has one assist to his name.

During his stint with Fluminense’s youth side, the Patrocinio-born midfielder was also loaned to the Croatian club Hajduk Split in 2013, the only club Cássio played for outside of his native Brazil.

Cássio Gabriel said, “Mumbai City have a great profile back home in Brazil. There are a number of Brazilians who have played at Mumbai City and I’ve only heard positive things about the Club. Mumbai City are the defending champions and their ambition is what convinced me that this is where I want to be. The Club wants to win titles, they want to be the best, not only in India but at a continental level, and I am really excited to be part of a Club of this mentality.”

“The ISL is one of the fastest-growing leagues in the world, and the quality of football being played here is really great. I know we have a massive season ahead of us, defending the ISL title as well as the AFC Champions League campaign. It will be a new challenge for me, but I am fully prepared for it, and I cannot wait to start this exciting journey with my new family,” he added.

Head Coach, Sergio Lobera said, “Cássio comes from an excellent football pedigree and brings a lot of valuable experience along with his skillset on the pitch. I believe he can be a vital member of the Mumbai City family and certainly contribute positively to the team’s performance. We are pleased to have a great talent like Cássio on our side.”