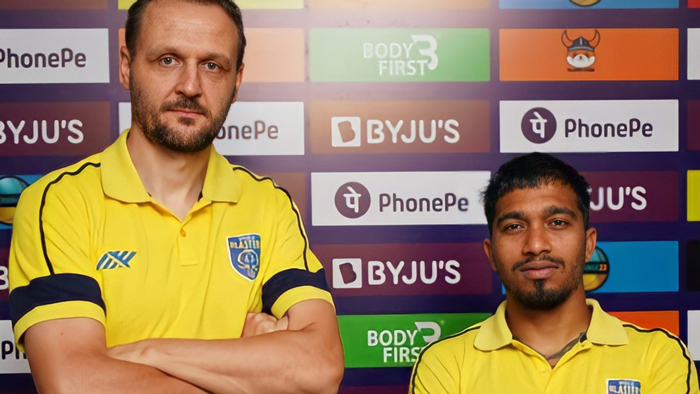 With two draws, one loss, and 2 points, Kerala Blasters FC will be eagerly awaiting their game against Odisha FC on Sunday 5 December. Odisha FC, on the other hand, has 6 points from 2 games and a win tomorrow would make them the table toppers with 9 points.

Kerala Blasters conceded four goals in their first game and has been defensively cautious in the last two games. Ivan Vukomanovic speaks about the change in tactics and the importance of balancing the attack and defense in a game.

“When you want to play attacking football as a team and press high it opens some possibilities for the opponents, and we concede some goals, then everybody starts speaking about how poor the defense is. When we play defensive football, and they will talk about how we didn’t score goals. This is football, in football, you have to find a balance between attack and defense. That’s what we are trying to do. We want to work hard on many things to be better.”

Blasters’ AFC player and Bhutanese star Chencho Gyeltshen came on as a substitute in the last three games. This is what Coach Ivan had to say about him and the other foreign players.

“All our foreign players are good enough to start, but we have a rule that only four foreign players are allowed on the pitch. Even for us, as the coaching staff, it’s a puzzle to find the correct formula. I am happy with the quality they are having, and they are showing it in the training sessions. I’d like to have them all on the pitch, but it’s impossible because two of them have to be on the bench.”

Winger Seityasen Singh was missing from the squad due to an injury during the training session. “Seityasen had a small injury during one of our training sessions. We are being careful, we want to avoid making stupid decisions by putting a player at risk and ruling him out for the rest of the season in a short league. Seityasen joined us in the training a few days ago. He is available for the next game just like everyone except Rahul who is in recovery.”

Odisha FC scored many goals from set-pieces and their team consists of a couple of free-kick experts. Coach Vukomanovic about preparing the team to face such situations.

“Not only set-pieces but every aspect. We played a friendly against Odisha, and we know our opponents. They are good at taking set-pieces and as a team, we have to prepare to face such things, but we are also preparing the other aspects as well.”

Coach Vukomanovic on the young players, their progress, and chances of them starting in the playing 11, “We are glad to have so many players with the potential to become important players in the ISL and for Kerala Blasters. They are trying to find their way in, and our goal is to give those boys time to play.”

Nishu Kumar returned after suffering from a long-term knee injury which kept him out of action for several months. He came as a substitute in the last two games taking on the role of the left-winger rather than his natural wing-back position.

“Firstly we are happy that Nishu is back after such an unpleasant period. He is working on his fitness and is in a period of improvement, getting better every day. We have numerous players who can play in multiple positions. They can play as wingers as well as wing-backs.”

“Nishu is playing as a winger because he does not have to cover both defense and attack of the entire flank, this way he can improve his game and become more confident. He is a national team player who has played so many games in the ISL and has scored goals. Now he has to improve his fitness, strength, and confidence level to become an important player for the team. We will see him in different positions in the coming games.” added Vukomanovic.

Coach Vukomanovic on the performance of Albino Gomes and other goalkeepers, “Yes, not only him, I am happy with the performances of all the goalkeepers. They’ve improved a lot from the time we started. The goalkeeping coach is the one who trains them and knows them better.”

Coach Ivan also spoke about the approach they took in the game against different opponents, the things they have to keep in mind while preparing a strategy and the wellness of the players, “In the game against ATKMB we were not in the condition to start two foreign center backs, and we played attacking football. We created good chances and scored two goals, yet we conceded four. There were referee’s decisions and mistakes from our side, but I don’t want to go back to it. We can’t control the ref’s decisions. We were the better team in the game against Northeast. Likewise, we should have won that game, we created so many chances, but it didn’t happen because we weren’t efficient and precise enough in the final third.”

“In the last game against Bengaluru, we had to consider players’ fatigue because we were playing our third game in nine days and against a team that’s good with the ball, so we opted for that. We had our moments in that game. If you see statistically, we were more in their final third than they were in ours, but we were missing a decisive pass that some of our players would have converted.”

“I am glad that on the fitness level we don’t have any problems. We prepare a strategy depending on our opponents and the situation. We have to find the correct balance, collect points and be competitive, that’s our goal,” said the Serbian tactician.

Captain Jessel Carneiro shared his opinion on his performance, his preferred position, and the overall performance of the team, “I am trying my best to adapt to the ways the coach wants me to play. The team is doing very well, we are adapting very well to whatever the plan is. We are working on ourselves, knowing our opponents, and doing what’s necessary to win the matches.”

“I am enjoying it. My first job is to defend and then attack. If I get a chance to attack, I will not hesitate and go for it. I like it, that’s my game and the coach knows that and has given me the freedom to go forward.” he added.