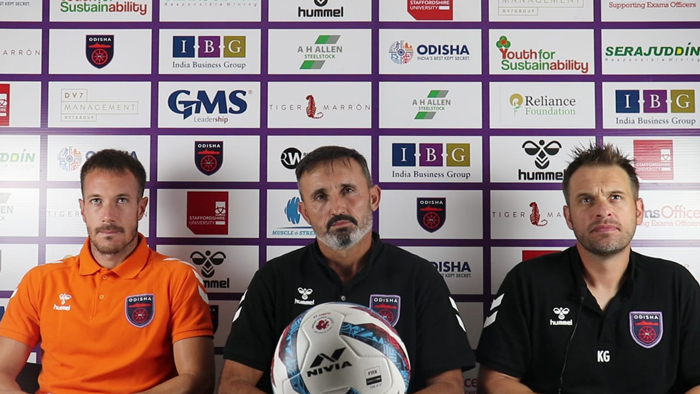 Odisha FC will now take on Kerala Blasters in its third game of the ongoing Hero Indian Super League (Hero ISL 2021-22) tomorrow after starting the season on a high by winning its first two games against Bengaluru FC and SC East Bengal. However, according to Head Coach Kiko Ramirez, the team needs a lot of improvement and he has stated that they are working on the same.

“We need to improve on a lot of things and we are working on that. Our focus in the next match will be on not losing concentration in some moments of the match and not losing control of the game because the last moments were crazy. We worked on that during the week and we think that the team improved and has a clear idea of what we want. It is important for the players to stay focused for 90 minutes,” the OFC gaffer asserted during the pre-match press conference.

“We are happy that we are scoring goals in different ways. We keep working on that. We keep working that the players find their best version and keep improving their individual capabilities,” he further added.

When asked about the Blasters, the 51-year-old Spaniard mentioned, “We played a friendly match against them during the pre-season so we faced them and we know that they are a good team and they are working well. Maybe they are not having good results but we think that it’s a hard match for everybody.”

The Head Coach was accompanied by the Assistant Coach and Head of Football Development Kino Garcia who spoke about the intent in the camp and how the coaches take decisions during the training sessions.

“All of us (the whole staff) discuss and decide on how we are going to attack and then we put our focus on the weaknesses that we find in the other team and the strengths we have. We have really good kickers so we are using that for scoring a lot in set-pieces but we need to improve more,” Kino said.

“I think that the young players of the team are performing really well. They are adapting to what we want as a staff from them. They are understanding their positioning on the pitch. One thing that we are doing well is giving them confidence that we trust in them and their capabilities.”

One of the three captains Victor Mongil also replied to a few of the queries from the journalists. He spoke about the League, the Indian footballers and his combination with Hector Rodas in the OFC defense.

“I think the level is better. The League is eight years old. Too many foreigners are playing here and the Indian players are also growing up. Now it’s more difficult. The football has changed,” Victor, who had won the Hero ISL trophy with ATK, commented.

“The Indian players (in the team) are growing up and are learning too much. We have a very good captain Vinit and he teaches the Indian players everything. He has a responsibility and he shows that every day not only in the matches but also on the training ground. Everybody is focused on our new objective. We have a big project and only think about this to give our maximum.”

When asked about Hector, he replied, “It’s amazing. It’s very easy to communicate with him on the pitch because we speak the same language. It’s good because in the matches, during the bad moments, we can help each other.”