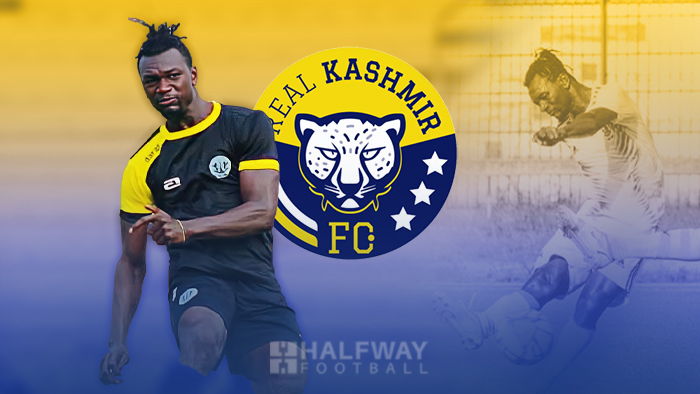 “Ibrahim Nurudeen had offers from Europe (Malta) and Thailand second division. He has chosen India and will be playing for I-League club Real Kashmir FC,” a source tracking the deal informed Halfway Football.

The 24-year-old centre-forward has experience of playing around 100 matches. He started his professional career with the Egyptian outfit Ghazl El Mahalla SC. Nurudeen had stints with Remo Stars FC, Kataina United, and Lobi Stars in Nigeria. He has also been part of the Ghanaian club Asante Kotoko.

For the last few years, the young striker has played for various Togolese clubs including ASC Kara, AS Binah, and AS Togo Port. The Ghanaian-born striker has been offered a Togolese passport and a chance to play for the Togo national team. “They (Togolese Football Federation) were so impressed with Nurudeen’s performance, called him for the national team and offered him a Togolese passport. He is yet to accept the offer,” the source revealed. Togo is a West-African nation lying next to Ghana.

The Snow Leopards are currently filling up their foreign quota and Ibrahim Nurudeen becomes the fourth foreign reinforcement. Halfway Football had earlier revealed the signing of Ghanaian defender Lamine Moro and striker Seidu Issahak. Nozim Babadzhanov from Tajikistan will be filling the Asian slot. RKFC has also made a couple of domestic signings and will be completing the signings in the coming weeks.