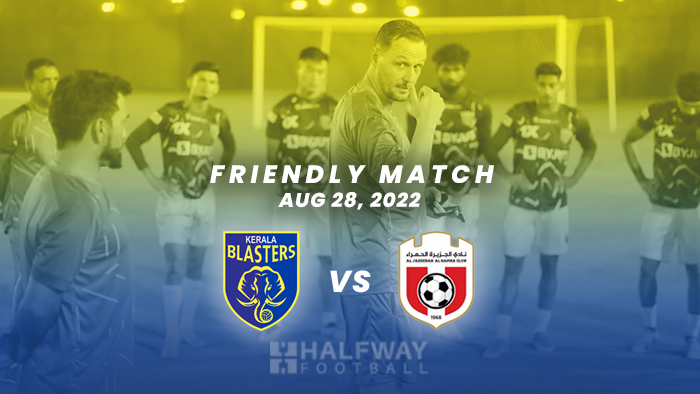 The Kochi-based club departed for UAE as part of their pre-season campaign on August 17 and was supposed to play three friendly games against top UAE clubs. UAE Pro League clubs Al Nasr SC, Dibba FC, and Hatta Club of UAE First Division were the teams ready to compete against the ISL side.

Unfortunately, the Blasters were forced to cancel the three pre-season friendlies scheduled due to the ban by FIFA on AIFF. “The team will continue to train in Dubai for the time being and alternative arrangements have already been made,” said the club in an official statement.

On August 26, FIFA officially announced that the ban on the AIFF is lifted and the clubs can play International matches and friendlies. Kerala Blasters were supposed to play Hatta Club in a friendly on August 28, instead, they will be up against another UAE First Division side Al Jazira Al Hamra FC on the same day at 7:00 PM UAE time (8:30 PM IST). The match will be played in Al Jazirah Al Hamra Stadium, which is the home stadium of the club.

As of now, 2000 fans will be able to watch the match with an entry pass and there will be no official Live Telecast of the match. H16 Sports are the organisers of the pre-season tour of Kerala Blasters in the UAE named ‘Hala Blasters’.