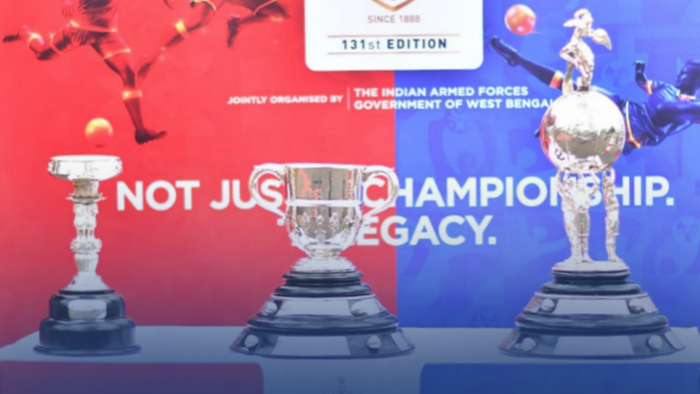 The three Trophies presented to the winners of the tournament, the original prize of The Durand Cup, The President’s Cup and The Shimla Trophy will first reach Guwahati in Assam on July 21st, then move to the Manipur capital Imphal on July 24th and further proceed to Jaipur, the capital of Rajasthan on July 27th, before travelling back to Kolkata on 02nd Aug 2022, where it will be received in front of the statue of the legendary footballer of yesteryears, Gostha Pal.

The destinations for the Trophy Tour have been chosen keeping in mind that Guwahati and Imphal will be first-time hosts, whereas, the state of Rajasthan will be fielding a team in this prestigious tournament after a gap of Forty Years.

Delivering an address on the occasion, the Hon. Minister for Sports & Youth Affairs, Government of West Bengal, Shri. Aroop Biswas said, “I commend the organizers for coming up with this brilliant idea of a Trophy Tour. This will help in spreading the popularity of the tournament further and help bring in new fans from new corners of the country. I wish the Durand Cup all the very best and on behalf of my sports loving Hon. Chief Minister Ms. Mamata Banerjee and Government of West Bengal, we assure all support in making the 131st edition bigger and better than the previous years.”

Also sharing his thoughts was Lt Gen R P Kalita, UYSM, AVSM, SM, VSM, General Officer Commanding-in-Chief, Eastern Command, who said, “It is indeed an honour to be a part of this historic occasion of the ‘Flagging Off’ of the first ever Trophy Tour of the iconic Durand Cup silverware. I would like to take this occasion to thank Ms Mamata Banerjee, Hon. Chief Minister of West Bengal for her continuous support in organising the tournament since 2019 and also the other two host states of Assam & Manipur for providing us with enthusiastic and proactive support in the preparations for the Durand Cup and I am confident that the same would continue throughout course of the tournament. It is also heartening to see the joy of Durand spreading further into the east with Assam and Manipur becoming first-time hosts.” He further also mentioned the active involvement entire sports dept under the guidance of the Hon. Sports minister.

Giving further details of the tournament Lt Gen Repswal, SM, VSM, Chief of Staff, Eastern Command and Chairman Durand Organising Committee, said, “This Durand Cup edition will definitely be bigger and better, not only from the perspective of having more teams than the previous edition, but also because it is travelling to two more states and all of India’s top division clubs have confirmed participation. We wish all participating teams all the very best. The support given by the State Sports Department has been very forthcoming which will help in making the tournament a grand success”.

There will be a total of 47 games with both Guwahati and Imphal hosting 10 games of group C and group D each, even as all the seven knockout games are being held in three West Bengal venues. The opening pool matches are slated to begin on August 16th at Kolkata’s Vivekananda Yuba Bharati Krirangan (VYBK) Stadium, August 17th at Guwahati’s Indira Gandhi Athletic Stadium and August 18th at Imphal’s Khuman Lampakh Stadium. The Tournament will culminate with the Grand Finale scheduled on September 18, 2022, at VYBK.