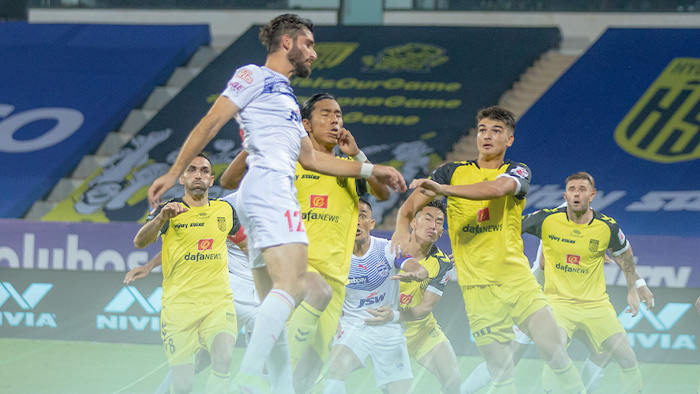 Both sides are unbeaten with two games played, and have collected four points each. Hyderabad FC are sitting on top of the Hero ISL table because of a superior goal difference, whereas Bengaluru FC are in fourth place as things stand.

Hyderabad FC have carried their good form from last season into both of their opening encounters. After participating in an enthralling 3-3 draw against Mumbai City FC in their season opener, they followed it up with a comfortable 3-0 win over NorthEast United FC.

Hyderabad FC were the league’s top goal scorers last season with 43 goals, and the attack seems to be firing on all cylinders once again. Interestingly, Hyderabad FC Head Coach Monolo Marquez has a style to press ahead but with BFC he needs to be mindful of the threat posed by the dangerous trio of the Blues – Roy, Siva and Sunil.

Manolo is now into his third year in the job, but has never managed in front of a full crowd at home.

“Two years in a bubble was very hard. We received a lot of messages on social media, and we knew in that moment that we had a lot of supporters behind us. To play for them is fantastic. For us, this is very good because we are wishing to play in front of our fans and we want to win tomorrow for them, especially,” he said.

Bengaluru FC had to work a little harder than Hyderabad FC for their four points, needing a 87th minute winner from Alan Costa against NorthEast United FC in a 1-0 win before drawing 1-1 to Chennayin FC in their second match. The two matches were fairly tight affairs, and Bengaluru FC head coach Simon Grayson suggested why that might be the case in his pre-match press conference.

“If we analyse the games so far, I think, for large parts, we’ve looked quite solid defensively. I think the system has worked, but then in possession we need to be a little bit better as a team – a bit more creativity. And in terms of keeping possession of the ball better – I think sometimes we overturn the ball too easily, which then asks questions of our defenders too frequently,” he said.

The two teams have faced each other 6 times in the league with 3 matches ending in a draw, 2 matches being won by Hyderabad FC and 1 by Bengaluru FC. Hyderabad FC won in both meetings last season.