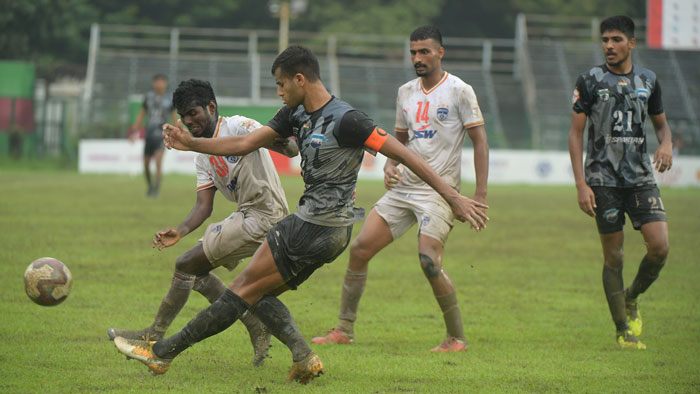 A high octane encounter between Delhi FC and Bengaluru FC ended in a 2-2 draw in an action packed Group C encounter of the 130th Durand Cup on September 18, 2021 at the Mohun Bagan ground. Willis Deon Plaza scored a brace for Delhi FC while Siva Sakthi. N and Bidyashagar Singh scored the two for Bengaluru FC. Group C is wide open now with all four teams having a chance to advance to the next stage.

The first half was a relatively quieter affair with both teams creating opportunities but failing to convert on most occasions. The slippery conditions at Mohun Bagan did not help either. However, in the 27th minute, Siva Shakti took a brilliant shot at goal to put the Blues ahead.

Delhi FC played a catching game post that. There were some great moments created by Willis Deon Plaza and Himanshu Jangra in the first half but Bengaluru keeper Lara did well.

The second half was an absolute turnaround with both teams looking all charged up. Delhi FC was the more dominant team and in the 58th minute, their star player Willis Deon Plaza scored the equalizer, courtesy a brilliant header. The Trinidad and Tobago national scored his second of the game four minutes later.

The team from Delhi seemed like going away with the game but Bengaluru’s Bidyashagar Singh had other plans. He collected a well-directed cross from Harmanpreet Singh, made no mistake and scored the equalizer, in the final quarter.

Both teams gave it their all to go one ahead in the final minutes but the well fought match ended in a draw with the two sides earning a point each deservedly.

Delhi FC’s Willis Deon Plaza was adjudged the Man of the Match.