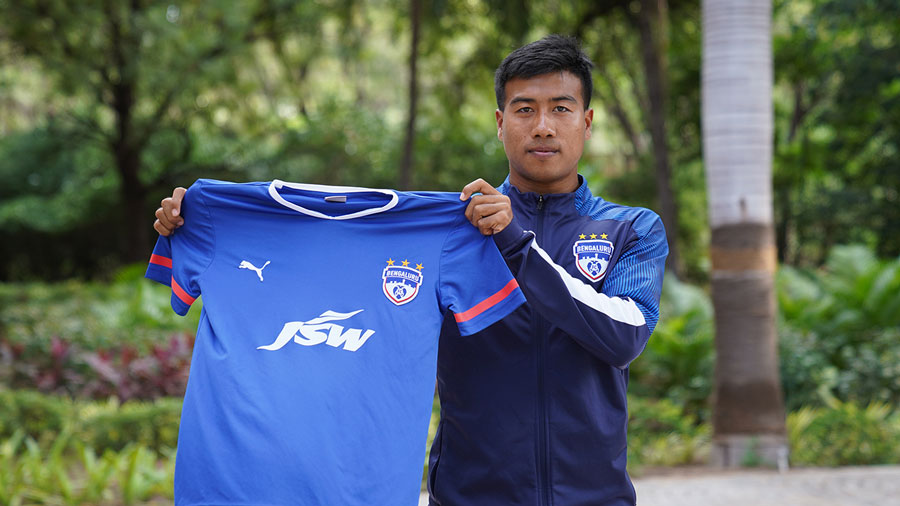 Bengaluru FC have bolstered their attacking line up with the signing of Bidyashagar Singh on a three-year contract, the club announced on Wednesday. The 23-year-old Manipuri becomes the eighth signing of the summer, and joins the Blues ahead of the upcoming AFC Cup playoff stage clash against Eagles FC.

Bidyashagar, who came through the Tiddim Road Athletic Union FC youth system, joined East Bengal in 2016. He first came into prominence when he took the Kolkata side’s U18 team to the finals of the 2016-17 U18 I-League, scoring six goals, including in both semifinals and final. He was promoted to the senior team and made his mark in the 2019 Durand Cup, even scoring twice in a 2-1 win over the Blues in the group stage.

INCOMING! 🔥 The Blues have acquired the services of 23-year-old striker Bidyashagar Singh, who finished top of the goalscoring charts in the 2020-21 I-League. #WeAreBFC #WelcomeBidya 🔵 pic.twitter.com/OtTazYtv2d

“Signing for Bengaluru FC is like a dream come true for me. Now that I am here, I want to achieve more for the club and for myself. I am eager to improve and to contribute to helping this team to continue the winning legacy that it has established. I know that I am surrounded by so many great players like Sunil bhai and Gurpreet bhai, and I want to learn from them and develop further,” said Bidyashagar, after putting pen to paper on his deal.

After making just 11 appearances in the I-League across two seasons, he returned to TRAU last year and his 12 goals, including two hat-tricks, took his boyhood side’s I-League title challenge to the final match day, with the team eventually finishing third in the standings.

“The opportunity to play for Bengaluru FC has arrived at the right time for me. Being in good form is very important for a striker and I would like to continue my good run here. My aim is to win trophies and to wear this club’s jersey with pride. I also want to do well here so that I can make it into our national team,” added Bidyashagar.

Comfortable playing on either flank, Bidyashagar became only the second Indian to pick up the I-League Golden Boot last season and in doing so, became only the fourth Indian to finish top scorer of a National League after Bhaichung Bhutia, Raman Vijayan and Blues’ skipper Sunil Chhetri. He was also named the ‘Hero of the Season’ and found a place in the I-League ‘Team of the Season.’

“Bidyashagar is a young player with a lot of potential. He is very eager to learn and make the next step and in the short time that he has been with us, he has shown us that he has the ability to score goals. The important thing now is to make sure he can bring his quality into our team and do that in the Indian Super League. He can play as a striker, as a winger and in behind the striker, which gives us a lot of options in attack,” said Blues’ Head Coach Marco Pezzaiuoli.

The Blues take on Club Eagles FC in their AFC Cup playoff clash, on August 15, in Maldives.