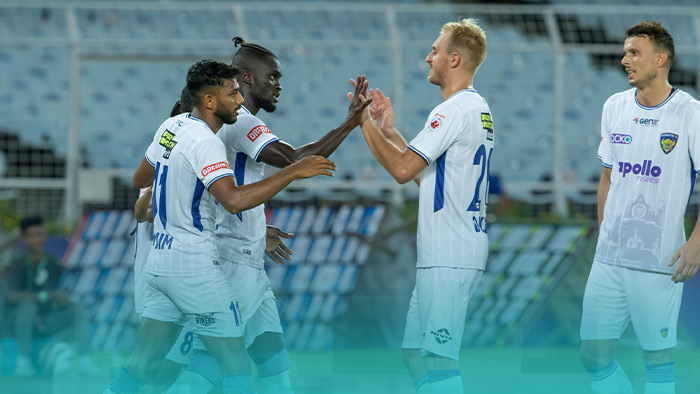 Chennaiyin FC kicked off their Hero Indian Super League (ISL) campaign with a 2-1 come-from-behind win over ATK Mohun Bagan at the Vivekananda Yuba Bharati Krirangan Stadium in Kolkata. Manvir Singh opened the account for the Mariners in the first half before Kwame Karikari and Rahim Ali won it for the Marina Machans in the second half.

Five minutes into the first half, Hugo Boumous whipped in a menacing cross from a corner towards Dimitri Petratos. The Australian’s strike was saved comfortably by Debjit Majumder in goal. Four minutes later, Chennaiyin advanced with Petar Sliskovic, who pulled the ball back for Anirudh Thapa. Thapa’s long-range shot was blocked by Brendan Hamill.

A heart-in-mouth moment came for the Marina Machans’ defence in the 15th minute when Majumder wasn’t fully on top of this game with a clearance and was robbed of the ball by Manvir Singh. The striker passed the ball to Ashique Kuruniyan before the winger’s shot was saved by a relieved Majumder.

The Green and Maroon Brigade broke the deadlock on the counter-attack. Boumous, Manvir and Petratos combined well before Petratos slid the ball into the box and Manvir side-footed it past the keeper to find the far corner of the goal and put the hosts in front in the 27th minute.

The tempo dropped considerably in the second half. Neither keeper was tested in the opening stages of the second half. Joni Kauka tried his luck from long range but his effort was comfortably blocked by Majumder in the 55th minute.

Four minutes past the hour mark, Chennaiyin FC drew level. Kwame Karikari, who had come on as a substitute in the 59th minute, was brought down in the box by ATK Mohun Bagan goalkeeper Vishal Kaith. The Ghanaian stepped up to take the penalty himself and netted the Marina Machans’ 200th Hero ISL goal.

Seven minutes from time, Chennaiyin FC turned it around. Scorer turned provider as Karikari cut the ball back towards Rahim Ali. The striker buried the ball into the bottom right corner from the edge of the box to give the visitors a decisive lead towards the end of the match.

Substitute Liston Colaco tried to curl a freekick into the top right corner as ATK Mohun Bagan chased the game at the end, but Majumder was quick to react and palmed the ball away to safety with a full stretch. Chennaiyin FC kept their composure in the final few minutes of the game to secure the win.

With three points in the bag, Chennaiyin FC will return home to host Bengaluru FC on Friday, October 14. ATK Mohun Bagan will make a trip down south to face Kerala Blasters in their second match on Sunday, October 16.