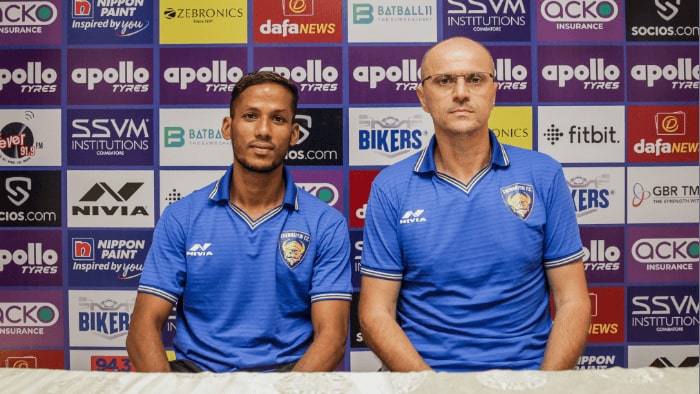 In the press conference ahead of the match, coach Bozidar Bandovic and defender Narayan Das spoke to the media.

About the tight schedule and rotations

“We had a short time in between the matches, we analyse our statistics and the opponents. With the training, we try to keep the players mentally and physically ready and about rotations let’s see that tomorrow,“ coach Bozidar said.

Assessment of first two games and areas of improvements

“I believe that we can do better, but it needs time and works physically, tactically in everything. But in December we have a game every three days. Till now I’m satisfied with the results. We had a very good start which gives us more confidence.”

“We go game by game, winning or losing they’ll be focused on making a comeback. We have a chance to make it three wins from three matches, that we’ve to do on the field we’ve to be better, we need to be quicker, we’ve to think fast. We need to show respect to every opponent, we know what to do. It doesn’t matter if they concede ten goals or nine goals they’ll come and try to win the game especially now.”

About Lallianzuala Chhangte and Rahim Ali

“Rahim Ali, I’ll decide tomorrow who will start. I don’t like to use the word Fail, Rahim works hard and tries to do better and he knows that he can do better. I believe in him and my players. It’s only a matter of time before he shows what he can do.”

“Lallianzuala Chhangte likes to play on the right wing and I decided to start him on the right after watching the training and preseason games. If the opponent demands positional changes we can always change in between matches.”

About Captaincy and Injury concerns

“Only Rafael Crivellaro is Injured, there are no other injury issues in the team.”

“Anirudh Thapa was chosen as the captain because I trust him and the fans trust him. This is his team and he knows what to do. He’s one of the best players I’ve coached.”

“Players need to be ready to play 95 minutes, when you get to play in the AFC Champions League the players are fast and quality. My players are the best but they need to work hard tactically and physically to improve their concentration and discipline. Better decisions make you win games.”

Narayan Das on the feeling ahead of facing his former side

“No much difference between any opponents. We’ve to improve game by game and have good confidence.”

About positional changes in between games and the experience in Chennaiyin

“It’s not hard to switch positions in between games. I just do what the coach asks me to do and adapt to his style. I’m very happy to be with Chennaiyin FC, we’ve won two games and we are trying to improve,” concluded former SC East Bengal defender.