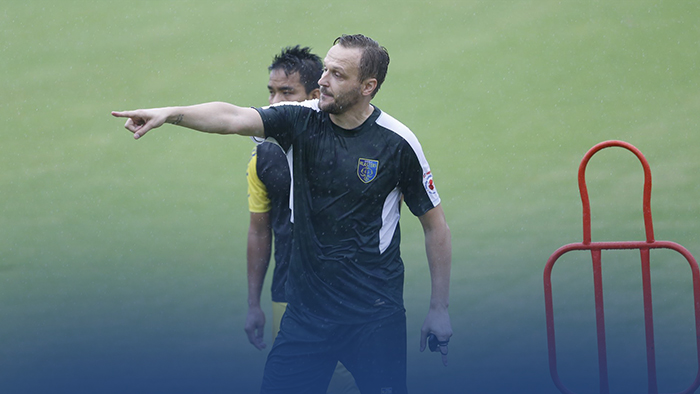 Kerala Blasters are going through their most successful time lately. The team is 4th on the table after winning back-to-back games against Mumbai City FC and Chennaiyin FC. Head coach Ivan Vukomanovic speaks ahead of tomorrow’s game against Jamshedpur FC.

Ivan Vukomanovic discussed the long ball tactics used against Chennaiyin FC in the most recent encounter. The opening goal of the game came from Jorge Pereyra Diaz, who broke the Chennaiyin defense. Vukomanovic weighed in on identifying and exploiting the opponent’s weakness.

“There were many aspects, this was one of those. Not only Jorge but Alvaro and others have those good movements, and we wanted to use it to our advantage when the opponent’s defense is strong. We observed the weak point of our opponents, and I am delighted to see us score like that.”

The Serbian strategist spoke about his young midfielders Puitea and Jeakson Singh, who played a key role in the team’s success. “Both of them have massive potential, and they give quality to the team. By working hard they’ve gained confidence, that’s how you improve in football. I’m glad to see how they’ve evolved and how they are enjoying playing for the team. We observed and analyzed their potential before the season and wanted to use it.”

Coach Vukomanovic expressed his appreciation for the KBFC supporters.
“We know that many of them support and want to see our team perform like this, and believe me when I say that we can feel their support and everything they are sending us from here in Goa. We can’t wait to play these games in front of that magnificent crowd in our stadium. I’ve huge respect for their continued support. Big thanks to them.”

When questioned about tomorrow’s game and the preseason match against Jamshedpur FC, the coach said, “Pre-season period was entirely different, now we are in the middle of the league. Both teams are playing with different mentalities. Tomorrow’s game will be a very hard, physical game.”

KBFC has gone undefeated in their previous six games and currently sits in fourth place in the standings. When asked about his chances of winning the league, Ivan replied, “Every team aims as high as possible before the season, but it depends on the circumstances and the opponents we face. We are a team that finished second from the bottom last year, so we need to shut up and work hard. In this situation, we just want to keep building up because football is all about momentum. We have to keep working hard, playing game by game, and see what’s the outcome.”

“In this league, anybody can beat anyone. We have to go game by game and see where it will take us if it’s at the top we’ll be happy, if not then we’ll have to work hard. We shouldn’t forget where we came from as a team we have to stay humble and continue working hard,” he added.

Vukomanovic also discussed KBFC’s tight schedule in the second phase of ISL, “We know we’d be getting such a calendar with fixtures close to each other. The coaching and medical staff are working hard to get the players fresh and ready for the game, especially when we play every three days. We are used to this. We have to deal with such things, and we don’t wish to use that as an excuse.”

Kerala Blasters’ Spanish forward Alvaro Vázquez spoke about playing with Jorge Pereyra Diaz and their combination which helped the team.