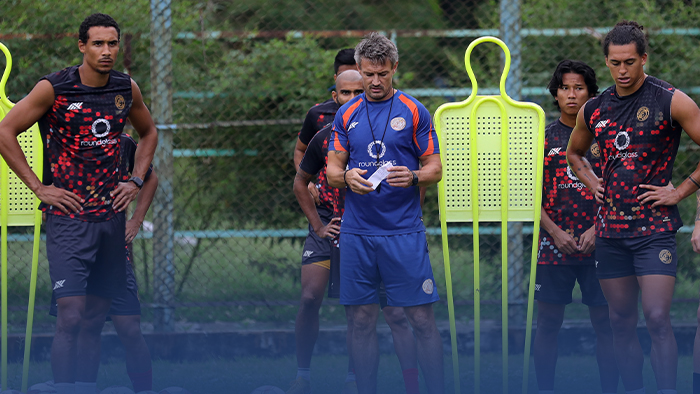 RoundGlass Punjab FC is all set to kick-off its Hero I-League 2021-22 campaign against newly-promoted Rajasthan United FC on December 26 (Sunday) at the Kalyani Stadium, at 7.30 PM.

After an impressive I-League debut in 2020-21 under its new ownership, the Club is determined to put out another inspiring show in the coming season with a squad that’s a blend of youth and experience and has been trained under Head Coach, Ashley Westwood.

Addressing the media at the official pre-match press conference on December 25, Westwood said, “It has been good 11 weeks of preparation in pre-season. A big plus for us is that we head into the first game with all players available and no injury worries. We feel that we’ve worked well and now, we’re in a position where we are ready for the game. The lads are excited to play tomorrow. The match has come at a good time for us. We feel well-prepared and hopefully, we can put on a good performance and start of the campaign with a nice result.”

Talking about the squad, the Head Coach said, “There’s competition for every place in the starting line-up. Everybody that’s here now has a genuine chance to play. We’re not 100% certain what team will play tomorrow but we do know that we can make substitutions at any minute without weakening the team, which is a real plus and a testament to the players we have and the way we have worked to get ourselves into this position.”

Defender Gurtej Singh said, “Our preparation has been very good after 11 weeks here in Kolkata and the squad is gelling together well. The bonding in the team is great and we have a wonderful mix of young and senior players. Everyone is working hard in training and we’re all ready to go for tomorrow’s match.”

Gurtej, who hails from Punjab, added, “I started my career at JCT and now, I am grateful to RoundGlass for giving me this opportunity of representing a team from my home state. I feel really proud to play for a Punjabi team.”

Westwood shared his thoughts on the team’s opponents as well, saying, “Rajasthan United are here and congratulations to them for earning promotion and reaching the I-League. It shows that they are a successful side and have winners in their ranks. Arguably, they have an advantage since they have been together longer and playing competitive matches longer. This game will be very tough, so we need to make sure we are on our toes and can perform at our true potential to have any chance of trying to get the result we want.”

He added, “We wish good luck to all the teams. Let’s have a nice and fair competition, and a good and competitive campaign. As the cliché goes, may the best team win!”

Over the transfer window, RoundGlass Punjab FC strengthened its ranks with highly experienced Indian stars such as CK Vineeth, Robin Singh, and Rino Anto, who will now be seen playing alongside players from the last season, like Bikash Yumnam, Saurabh Bhanwala and Aakash Sangwan.

Spanish midfielder Joseba Beitia will continue from last season, with defender Josef Yarney and forwards Kurtis Guthrie and Travis Major being the three new additions to the Club’s foreign contingent.

The team underwent 10 weeks of pre-season training in Kolkata, which began on October 8, and entered the League’s bio-bubble on December 16.

The RoundGlass Punjab FC squad for I-League 2021-22 is as follows: