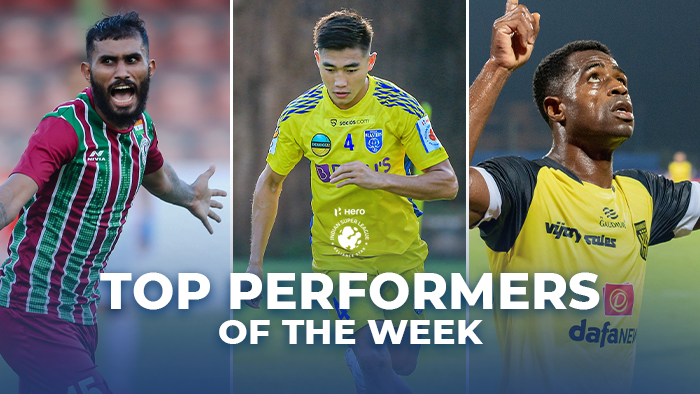 Yet another game weekend today and we have our top performers of the week. Goals galore, extra defensive games this week had it all. There are some surprising but promising names as we analyzed who all should make it to the list of showstoppers this week.

The southerners Kerala Blasters FC humiliated the defending champions Mumbai City FC at their home on Sunday and Jorge Pereyra Díaz was inarguably one of the best players on the pitch where he bagged a goal and assist to the records. 27th minute of the game Diaz received a ball inside the box he passes it to an unmarked Sahal Samad. Sahal makes no mistakes as he puts it into the net to give KBFC the much-needed early lead. In the 50th minute, Jorge charged towards the MCFC post and Mourtada Fall had no choice but to clip him down which gives him a red card and a penalty for Kerala Blasters FC. Jorge made no mistake from the spot to make it 3 nil cushion lead to his side. Let’s take a look at his numbers

A 20-year-old center back, who was playing his debut ISL Match. Fairy tale stuff but it’s very realistic for Hormipam. He didn’t have a flawless game but he was one of the best players on the pitch. He was a bit shaky at times but Leskovic was covering for him very well. Hormipam was rock solid at the back considering he’s a debutant. He made seven clearances and five Interceptions also won all of the ground duels.

Greg Stewart has made it into all of our top performers’ list and he’s continuing the same. He won a free kick in the first minute itself but was easy save for Gurpreet. In the fourth minute, Stewart set Murray a goal-scoring chance but Murray misses it. Again at the 25th minute, he sets up a beautiful cross from the left for Murray but Gurpreet cleared it with a punch. The story continues and Greg Stewart was the best player on Jamshedpur FC throughout the match. Match ended as a goalless draw but Greg had 76 % passing accuracy. let’s look at the numbers he created.

Gurpreet Singh Sandhu stood tall in front of the goal post against Jamshedpur FC. Opponents knocked on the door many times but couldn’t get past Sandhu. The 29-year-old custodian saved the night for BFC many times. Started in the very first minute saving a free kick from Greg Stewart and again in the 25th minute, he Punched away another ball from Greg. Let’s take a look at his numbers.

Saves from inside box: 4

Subhasish Bose was equally important offensively and defensively to ATKMB as they got a narrow victory over Northeast United FC. As early as in the 53rd minute Subhashish gave an assist to Hugo which got them a 2-1 lead. He bagged an assist and made 3 important Clearances to lead ATKMB to glory after a rough patch.

Hugo Boumous and his contributions to the game are beyond words. He’s an absolute magician on the field with the ball at his feet. He had quite a good first half but in the second half 53rd minute, Hugo Boumous finds the back of the net, thanks to a well-set assist from Subhashish. In the 76th minute, Hugo finds the net again this time the assist was from Joni Kauko and this time a beautiful chipping goal over a diving Mirshad. Other than two goals let’s look into the numbers he provided.

Adrian Luna took home the Man of the match award yet another time, credits to a mesmerizing performance from him as Kerala Blasters bagged the bragging rights of South Indian Derby. In the 28th minute, Luna whips in a cross to Diaz but not the best header from Jorge. As early as in the 51st minute of the second-half Luna sets up Jessel Carneiro for a goal-scoring opportunity but he hits the bar. And in the 79th minute, Luna gives a pass to Alvaro Vasquez who was in the box but it was blocked yet the ball deflected back to Luna and he finds the back of the net with a sublime finish. Over the Moon Adrian Luna. He didn’t just confine his contributions to the attack he did his best to track back and defend to keep their lead and clean sheet intact.

Jeakson Singh is an unsung Hero in the star-studded midfield of Kerala Blasters and he had yet another very good game against their noisy rivals Chennaiyin FC. It’s tough to get past him to test their defensive line. His partnership with Lalthathanga Khawlhring is notable. Many had doubts about the defensive midfielder position before the season kickoff but the youngsters are paying it back truly to the trust from their coach. Jeakson, whenever he lost the Possession he was rushing back to get back the Possession. In numbers below

As the game ended as a stalemate between SC East Bengal and Hyderabad FC. Bartholomew Ogbeche gave a crucial equalizer to bag one point for the Nizams. He had his chances but as the most dangerous player, he was tightly marked throughout the game. East Bengal tried to silence him as much as possible because he will strike even if he gets a half chance. In the 35th minute as Hyderabad FC was trailing to one goal, Aniket Jadhav puts a nice flat cross to Bart who was present in the box as SC East Bengal defender misjudged the jump Ogbeche flicks the ball nicely and bagged the only goal for Nizams.

Ivan Is a savior to a struggling FC Goa as they drew to Odisha FC. He scored the only goal for FC Goa and was a towering presence at the back. In the 42nd minute, Ivan finds the net to put FC goa in lead from a beautiful delivery by Alberto Noguera. He did a very close goal line Clearance to give Goa their only point. His game in numbers and he’s more than a center back.

These ten very talented and hardworking players are our top performers of the week. As the next game week started on the boxing day with a thriller between Kerala Blasters and Jamshedpur FC we will come at the end of the next week with another set of 10 players.