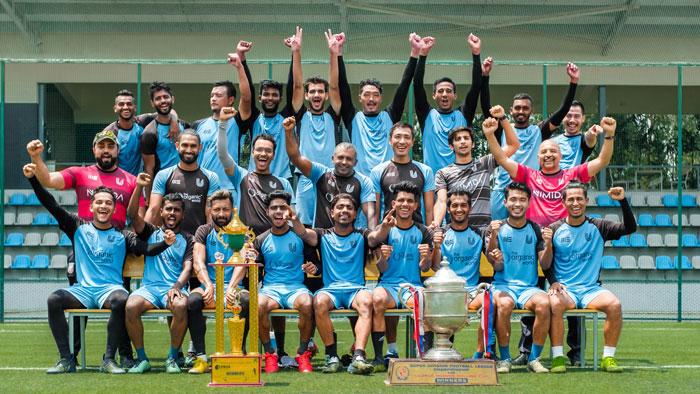 FC Bengaluru United have released a list of 13 retained players ahead of the 2021-22 domestic season. Having been crowned BDFA Super Division Champions earlier this year, the Bengaluru club will be keen to carry forward the momentum as they launch their bid to qualify for the I-League in September.

“We have always been clear and focused on our goal – to bring Bengaluru back to the I-League,” said Gaurav Manchanda, Owner, FC Bengaluru United. “We are thankful to all the players who have played an integral role in the journey thus far. Continuity plays a key role in building a robust team structure and we are glad we have the core strength to ensure this going forward into the new season.”

Among the retained players are some notable names, including attacking midfielder Hayden Fernandes and Arun N, who was adjudged the best midfielder in the 2019-20 BDFA Super Division. Ronaldo Oliveira, who top scored for the club in the recently concluded BDFA Super Division League, has also been retained, as has long-time FC Bengaluru United goalkeeper Srijith Ramesh.

“Since last October last year, all decisions have been made keeping in mind the upcoming Qualifiers,” said Richard Hood, Head Coach, FC Bengaluru United. “We immensely value and respect the contributions of the players who have not been able to continue with us. The BDFA Super Division was a crucial platform to assess our squad for strengths and gaps – and the retained players have displayed the qualities to build on our game model with which we want to secure competitive success and promotion to the I-League.”

The full list of the thirteen players retained by FC Bengaluru United for the 2021-22 season is as follows: