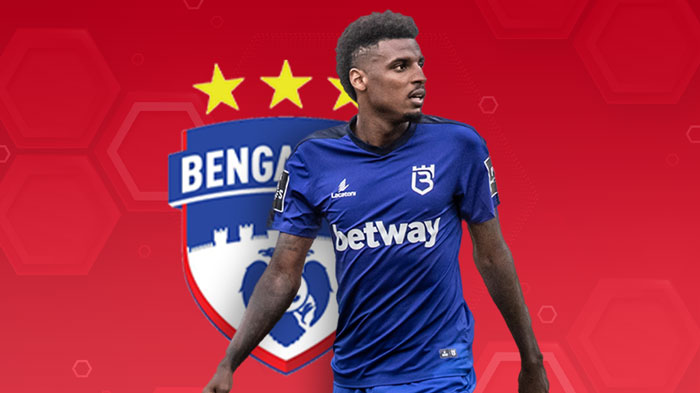 Bengaluru FC on Saturday announced the arrival of Brazilian midfielder Bruno Ramires. The 27-year-old has signed on a two-year contract with the club.

He last played for Belenenses SAD in the Portuguese League which finished 10th on the points table. He has previously played in the top divisions of Brazil and Portugal. He has played for clubs like Cruzeiro, Moreirense, Ponte Preta, CSA, Feirense and Belenenses SAD.

Brazilian midfielder Bruno Ramires has put pen to paper on a two-year-deal that will keep him in Bengaluru Blue until the end of the 2022-23 campaign. 🔥#BrunoIsBlue 🔵 #WeAreBFC pic.twitter.com/TL7vC5rhrS

His primary positions are central midfield and defensive midfield. He generally operates the best when he is deployed as the central midfielder in 4-3-3. His videos reminded a bit of Suresh Wangjam as he also operates at the same positions and possesses the same attributes. He can drop off to make the double pivot generally from the right side.

He looks physical, and his stats suggest that he capitalizes on the physicality, as he tends to involve in the duels a lot. The success rate in aerial duels is a lot better than ground duels. He had a 51% success rate in aerial duels in the last season for Belenenses SAD. Most of the aerial duels he was involved in were from the opposition goal kicks. This is pretty obvious considering the target zone of the goal kicks. He involves in midfield battles, both on the ground and aerial. Due to his physique, one must be thinking that he would have been winning a lot of them. But this isn’t the case when it comes to the ground duels. Last season for Belenses SAD, he had 37% success in the ground duels. The lost ground duels often resulted in possession loss and sometimes fouls.

He can also be used as a single pivot in the 4-3-3 formation. Last season he had around 76% passing accuracy which translated to 10 passes per game. As he wasn’t much involved in the passing duties and wasn’t a go-to starter for the club.

His attacking stats aren’t the most impressive ones. He, in general, doesn’t get involved in the attacking department. Mainly because he was mostly deployed to do the “dirty work”, as many would say. Last season, he had 1 G/A to his name (1 goal) and zero key passes (passes that create high percentage chances). He had zero dribbles completed and doesn’t shoot very often. This also indicates the lack of offensiveness he possesses, but that could be because he has been playing a defensive role for his entire career.

Conclusion: A replacement for Dimas Delgado?

Many fans were saying were that Bengaluru FC could need a like to like replacement of Dimas Delgado. It’s clear that, Bruno Ramires differs a lot from Dimas Delgado’s profile. In terms of BFC, one can say that Bruno is more like Erik Paartalu than Dimas Delgado. But then again, Erik had huge benefits in the set pieces and found a huge role in Cuadrat’s setup. Or even if someone resembles his profile to someone like Pronay Halder, they might not be wrong.