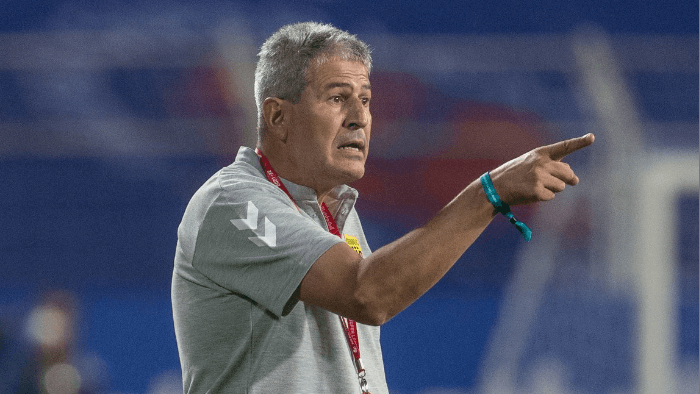 Hyderabad FC takes on Jamshedpur FC in match 15 of Hero ISL season 8. Hyderabad FC had a dull start to the season after losing to Chennaiyin FC in their opening match but they’ve made their comeback in style, pummelling the defending champions Mumbai City FC.

In the press conference ahead of the match, coach Manolo discussed the victory over reigning champions and the upcoming hurdle against Jamshedpur FC.

About the win over Mumbai City FC

When you win a game especially against the reigning champions, the spirit is great. After the defeat in the first game, this helped us recover our confidence. If you can beat the champions you can beat any team, that’s what I believe. We can’t recover the points dropped in the first game, when you play every five days it’s not just about the results but also the mentality.

Owen Coyle’s teams are tough to play against. When we played last season matches ended in draws. They have Jordan Murray and Valskis who guarantee goals and they also have good quality in every position. I think they are much stronger this year. They also have players who played well from last season, I think they’re a team that will fight for the top-four spot.

We will not change our game style and this time they’re also an attacking side, they showed that against FC Goa. I think it’ll be an equal game with some small deciding factors.

Performance of Rohit Danu and other youngsters

With the new rule, a lot of Indian players are showing their talent and personality not just in Hyderabad but at all the other clubs. We are really happy with our foreign players also, they’re also important to our squad.

Danu is a good player with a great mentality and the goal he scored won’t change that. He wants to learn every day in training sessions and we have to work on the progress of our Indian players’ step by step.

Fans can always expect the best from us, we can’t promise results but at least we will try and work hard. I hope that fans will enjoy our game style and we will stick to the style.