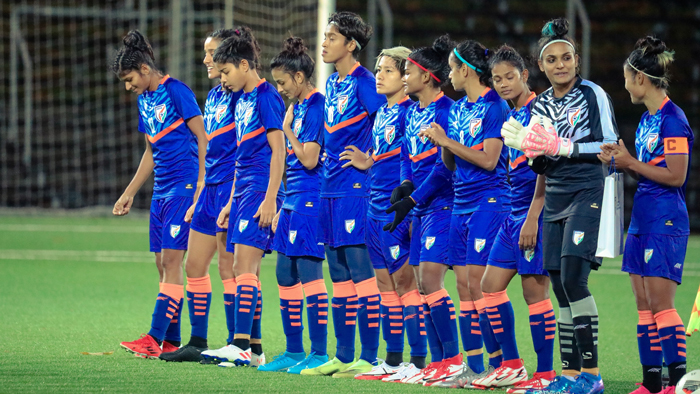 The Indian women’s national team is all set to play against Brazil, Chile, and Venezuela in a four-nation international tournament held in Manaus, Brazil.

The Blue Tigresses will face Brazil on 26 November, and this will be the first time that a senior side will be playing against Brazil. This game will also be Brazilian legend Formiga’s last for As Canarinhas. The 43-year midfielder is Brazil’s most capped player with 233 appearances and has played in seven World Cups and seven Olympic Games.

Former West Ham United and current number one of the national team Aditi Chauhan speaks about playing against Brazil, “We are excited! We never dreamed of playing against Brazil. Marta and the other players are people who we’ve looked up to. We watched them in the world cup and Olympics. I can’t say that it’s a dream come true because we never dreamed about it. We are honored and feel special because our coaching staff and the federation believed that we can play against a team like Brazil. It will be a match that we’ll remember for the rest of our lives. We will not be overwhelmed by the occasion, we will prepare like how we prepare for other matches and go all out”.

“We’ve never been to South America. South American football is different from Asian football. This will be a great experience as we prepare for the AFC Asia Cup, where we’ll be getting some though teams. Playing against teams that have played the world cup and Olympics will make us better and test ourselves on what we’ve been working on for the past three months”, she added.

Indumathi Kathiresan, who was the joint top scorer at the 2019 SAFF Women’s Championship, said, “We’re getting such an opportunity for the first time to play against Brazil. AIFF gave us this opportunity to gain experience. We’ve played friendlies against Bahrain, UAE, and Swedish clubs, that was also a good experience. We never thought we’d play against Brazil, their standards are very high, and we’ll understand where we stand after playing against them”.

AIFF Emerging Footballer of the Year Manisha Kalyan who played a pivotal role in Gokulam Kerala FC’s success in the 2019-20 Indian Women’s League said, “When I heard we were traveling to Brazil, I was excited. We are going to play against a country which has got a big name in football”.

“We used to follow Brazilian players during world cups. We learned football by watching them. It is good for us to play against a team that is superior to us in experience and give them a thought competition. We’ll learn a lot from this trip playing against high-ranked teams, our bonding will improve, and we’ll take this to the AFC[Asia] Cup”, said the young forward.

“Our team has bonded well. Thomas [Dennerby] sir, our coach helped us with the technical side of the game, and our performance has also improved”, she added.

KRYPHSA FC forward Anju Tamang shared her thoughts on how these matches are going to help the team prepare for the AFC Women’s Asia Cup, “I couldn’t believe it. I went and asked our team manager if this is true. I wanted to confirm it. They’ve been playing for years. They’ve played in the world cup and the Olympics. We will get to learn a lot from them and this experience will help us in AFC [Asia] Cup preparation. After playing those games in Sweden, we’ve become more confident. Now there is an understanding, we’ve bonded. All these will help us to do better in the AFC cup”.

The players are excited about meeting and playing against the Brazilian superstar Marta.

“From the time I started watching football, I’ve been following the Brazilian team. I used to watch Marta, her dribbling and hunger for scoring have inspired me a lot”. said Anju

Indumathi also shared her excitement. “Yeah, I follow Marta. She is one of the best players. Now we might play against her. I never thought we’d play against them. I don’t know how to express it”.