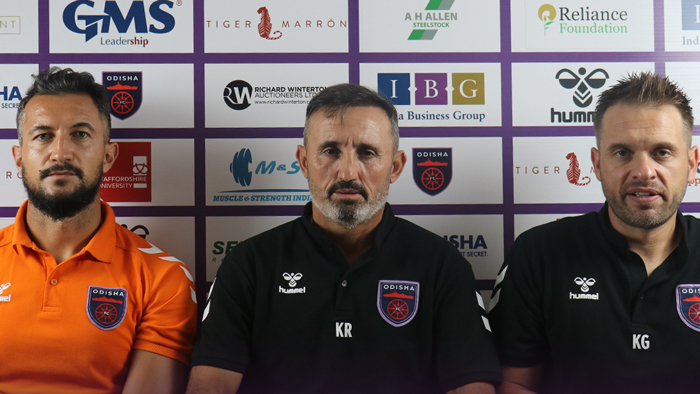 In his first-ever interaction with the journalists ahead of the season opener against Bengaluru FC, Head Coach Kiko Ramirez has said that he and his team are fully focused on the game and the Kalinga Warriors are ready for the competition. The 51-year-old Spaniard is in India for the first time but he feels that the long pre-season with the boys has definitely helped in the preparation for the new Hero ISL season.

“This is of course the first time for me in the Indian Super League and I feel that I am ready for the competition. I also feel that the team is prepared for the ISL. We had a long pre-season where we prepared everything for the competition that we have ahead. It’s going to be a tough game. Bengaluru won the first game. They have good attackers and they are good with the ball and they have a good history in the ISL. We know that this is going to be a hard match but we are ready,” Coach Kiko said during the pre-match press conference.

“Of course the team has to be 100% focused on the game and don’t make any mistakes. We know that they have quality attackers so the team has to be focused and do what we have prepared in the week. As a coach, it’s going to be difficult for me in the first game to choose the lineup. Almost everyone is in good condition. We are ready for the match.”

When asked about the six foreigners in the side, he mentioned, “I am really happy with the new foreigners. They have adapted really quickly to the team, culture, country and the football during the friendly matches. I am sure that they are going to perform really well during the season.”

Assistant Coach and Head of Football Development Kino Garcia accompanied Kiko for the press conference. He is of the opinion that the pre-season was important in bringing all the players closer.

“I think the banters that the young players are having, we don’t need to motivate them. They are motivated every day. Sometimes even too motivated and we need to calm down because they want to learn. They are with experienced players who can show them different tactical and technical aspects during the training and during the matches.”

Odisha FC had announced three captains for the season last month and Spanish defender Hector Rodas is one of them. The 33-year-old Valencia footballer has adapted to the condition in India quickly and has a vision of inculcating good values into his younger teammates.

“I am very happy here. I adapted to the situation and the environment really quickly. I am really happy with the way the Indian players and all the people in Odisha welcomed me when I arrived. It’s true that this is my first experience in Asia and first experience in a bio bubble but I feel happy and well to be here,” Hector commented.

“Even though the players chose me, Vinit, and Victor as the captains, all the players of the team must be leaders and must show a good attitude and good values during the season. Of course, everybody of them will try to show these to the young players and try to go all out in the same line to achieve the objective.”