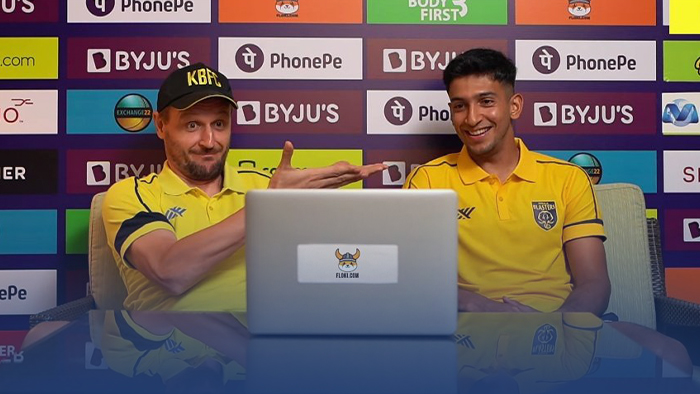 After a great victory against the league leaders on Sunday, Ivan Vukomanovic and the boys are all set to take on their Southern rivals Chennaiyin FC. Ivan Vukomanovic spoke to the media ahead of tomorrow’s game.

Ivan Vukomanovic spoke about Chennaiyin FC, a defensively strong squad, and the game that will take place tomorrow. The gaffer said, “Tomorrow’s game against Chennaiyin FC will be entirely different from the one against Mumbai City FC. Depending on your opponents you have to change the approach. There are many ideas, and we want to become the team that will play high pressing football and brings difficult moments to our opponents. We’ll see after today’s training how we’ll prepare for tomorrow.”

Further, he added, “We’ve faced our tomorrow’s opponents before in pre-season. We’ve (Vukomanovic and CFC coach) known each other for a long time. Looking at things from that perspective, there will be no surprises in tomorrow’s game. The game will be a tight one. I think it will be the opposite of what we saw in the last game. I expect a hard game with numerous duels and hopefully, we’ll try to explore some weak points to create chances and score goals.”

Midfielder Adrian Luna was seen in a different position on the wings in the recent game against Mumbai City FC. Coach comments about his players’ versatility.

“We are happy to have players who are capable of playing in different positions. I am happy that they are improving in those positions and giving the team what’s required. It also gives the coach the motivation to work. We’ll always try to find a formula to overcome our opponents.”

Ruivah Hormipam’s performance in the previous game wowed everyone. Vukomanovic spoke about the need of giving young players opportunities.
“We have many young players. The club’s objective is to promote these youngsters who will later become an important part of Kerala Blasters. Not only Hormipam, but we are also happy to see all our players working hard. As a coach, it gives me the confidence to see youngsters doing their thing and being there for the team. We’ll probably see more youngsters make their way into the pitch and play more minutes.”

When asked about his team’s inability to capitalize on set pieces, the coach responded, “As a team, we are working on that. Sometimes we score goals from set pieces otherwise we don’t, so we have to explore all other options. We are working on that like every other team. Many teams are scoring goals from set-pieces, especially in the previous seasons, many ISL teams are focused on defending set-pieces because many goals have been conceded that way. Hopefully, tomorrow we can score from a set-piece.”

Forward Pereyra Jorge Diaz was seen on a structure being carried away from the pitch. Diaz scored a goal and set up Sahal’s goal in the team’s win over Mumbai City FC.

“The injury is not a serious one. He got an unpleasant kick on his ankle which led to muscle inflammation. He could have continued, but we wanted to avoid taking risks, so we took him off the pitch. Likewise, he is available for tomorrow’s game.”

The Serbian tactician also talked about how to prepare for a game and what to remember before a game, as well as how to deal with specific opponents.

“We have an idea on how to face this defensively strong team. We faced them in pre-season. We will try to explore certain things and do our best,” he added.