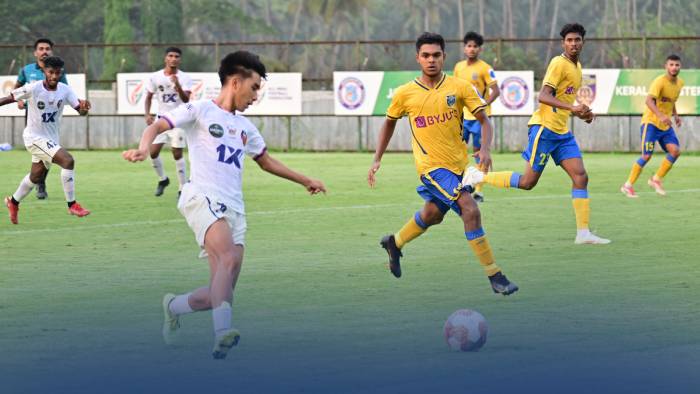 In another game, Hyderabad FC moved to third in the points table with a facile 5-0 win over wooden spooners Mumbai City FC at the Nagoa Ground.

Goa, with the win, are on sixth spot with seven points from five games, making it four teams on the same number of points with Hyderabad placed third because of superior head-to-head record among them. RF Young Champs and Jamshedpur FC are the other two teams on seven points. There are two more rounds to play in the inaugural RFDL.

Kerala, who could have joined Bengaluru FC in assuring a spot in the top-two on Wednesday itself, remain second (12 points) needing two points from two games to secure their spot and a place in the Next Gen Cup.

Nihal Sudeesh opened the scoring for Kerala (20th) but Jovial’s brace (42nd, 85th) helped the Gaurs take the lead for the first time in the game before Brison Fernandes (89th) put the game to bed.

Kerala captain Ayush Adhikari swung in a delightful ball from the left side of midfield for Nihal to glance a header past Hrithik Tiwari in Goa goal. Just before halftime, Goa were rewarded for their industry after falling behind, Jovial controlling the ball well inside the box to fire home past a diving Muheet Shabir, playing his first game under the bar for Kerala.

Both teams were on an even keel in the second period before Goa turned the screws on their more fancied rivals in the last five minutes. First, Jovial scooped a Brison pass over the keeper and into the back of the net. Four minutes later, Mevan Dias made a darting run down the left from a counter attack to find Brison who took a touch and sent a rocket of a shot past the keeper.

Earlier, winless Mumbai needed to be at their very best to get the better of Hyderabad but from the off, it was the same story for the Islanders as Hyderabad bossed proceedings.

Sunny opened the floodgates, getting on the end of a cross inside the box and showing strength to power the ball home past his marker. Two minutes later, Koustav converted from the spot after the brilliant Abhijit was tripped inside the area.

Sunny then turned provider, squaring for Abhijit to tap in after a slick move. Hyderabad could have gone into the break with a 4-0 lead but C. Lalchungnunga’s free kick came off the crossbar on the stroke of halftime.

Coach Shameel Chembakath ringed in the changes after the break with Crespo and Bordoloi making their intentions clear moments after coming on with two goals in the space of two late second-half minutes. Crespo showed excellent feet inside the box to skip past two defenders and fire home, with Bordoloi completing the rout two minutes later nodding in a cross from close.