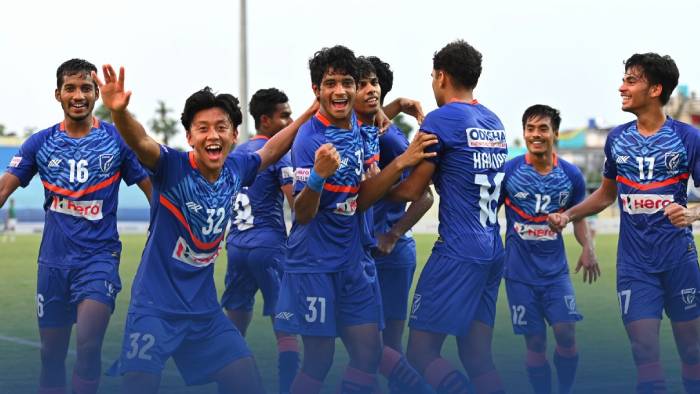 Indian Arrows drove a dagger through Kenkre FC hearts with a last-gasp winner, here at the Naihati Stadium. Playing for survival, Kenkre failed to open their account against Arrows. Substitute Himanshu Jangra’s 90th minute strike put the match to bed.

Carrying the momentum built on their recent form, Kenkre wanted to add another win to their tally, knowing that a Real Kashmir fumble could mean survival in the Hero I-League. Seven minutes into the game, a loose pass in the Arrows’ defensive third came to Yash Mhatre but he could not do any damage with it.

Vijay Nagappan was the next Kenkre player to try his luck as the midfielder came running towards the box with the ball just to put his shot wide of goal. At the other end, Sayan Das and Brijesh Giri tried to execute a quick one-two manoeuvre but the latter ended up over-hitting the last pass. Nagappan had another opportunity when Akeraj Martins’ cross was cleared but landed straight in front of him. The midfielder’s shot was blocked by the Arrows defence.

Seventeen minutes into the game, it was still goalless. Martins received a good ball from Aniket Panchal, but the prior’s shot was off target as Kenkre squandered another goalscoring opportunity. Parthib Gogoi was causing a few problems for the Kenkre defence as his long-range attempt flew just wide of goal. Less than 10 minutes later, Gogoi went for goal from a freekick on the left side of the box. His powerful effort was beaten away by Tenzin Samdup.

As Kenkre were desperate for a goal, Gogoi was constantly looking for a chance to put his side in front. The Arrows’ skipper came closest when his looping effort came off the crossbar after Samdup had dealt with a cross from Tankadhar Bag. Five minutes from half-time, Martins was withdrawn and replaced by Kynsailang Khongsit. In the final minute of the first half, Khongsit played a promising cross into the box but Pravitto Raju’s header from close range was off target.

Khongsit was at it again two minutes into the second half as his ball in from the right sailed over everyone and rolled out of play. The ball was smashed into the net by Giri from Bag’s cross but the offside flag went up as Kenkre heaved a sigh of relief.

A little over 10 minutes into the second half, Gogoi was withdrawn and replaced by Taison Singh in a surprising substitution. Right after the substitution, Aravindraj Rajan whipped the ball in from a freekick. Lovepreet Singh completely missed the ball but neither Kiran Pandhare nor Yash Mhatre were able to bury it into the back of the net.

Minutes past the hour mark, Indian Arrows rattled the crossbar twice in quick succession. Tankadhar Bag’s venomous long-ranger beat the keeper but could not beat the frame of the goal. Less than a minute later, Vinay Harji’s effort from the edge of the box also beat the keeper and skimmed the bar. At the other end, Mhatre got the ball after a poor clearance attempt. However, Mhatre’s effort was saved by Lovepreet Singh.

In the final ten minutes of the game, Indian Arrows frustrated Kenkre by keeping more of the ball. Vibin Mohanan was denied by a good save from Samdup. Taison’s pull-back for Harji came to nothing as the latter’s strike was high. Kenkre were living on the edge as chaotic defending saw Banpynkhrawnam Nongkhlaw clear the ball off the line after the keeper had palmed substitute Himanshu Jangra’s cross away.

In the final minute of regulation time, Jangra put the ball in the net, breaking Kenkre hearts right at the death. Abdul Hanan casually played the ball into the box from the left as Suraj Negi failed to stay with Jangra. The substitute made no mistake as he slotted the ball home, giving Arrows the win and putting the final nail in Kenkre’s coffin.