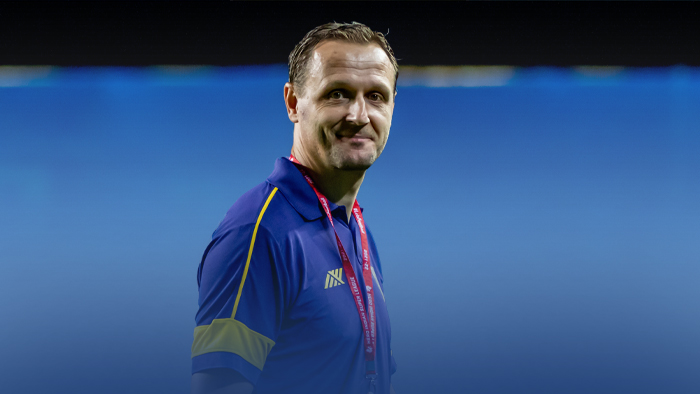 Kerala Blasters are all set to take on SC East Bengal in their 5th game of this season. Head coach Ivan Vukomanovic and midfielder Puitea speaks to the media ahead of their side’s game tomorrow.

Adrian Luna has been the key player in all the games so far. The Uruguayan midfielder set up both the goals in their last game. Vukomanovic shared his thoughts on Luna.

“It goes back to the time when we started to build this project, we were looking for foreigners who could bring something extra to the team and Luna was one of the options available. Not only as a player but also as a person, he brings a lot of value to the team. He fits perfectly into a group, he is very humble and polite. He supports other players and improves them.”

KBFC has transformed itself into a team that fights until the last whistle. When asked about the mentality of the players, the coach said, “In a football game, we must never give up, it’s 90 to 95 minutes of hard work. Anything is possible in ISL this season. As a team, we should believe that we can win every game, and we can fight until the last minute. When you have that energy and respect among the players, they will fight for each other. This kind of respect is required if we want to achieve certain things. I believe that the boys have it in them, and they want to prove it.”

Blasters have bounced back after a disappointing start. It seems everything has been falling into place according to their plan.

“We wanted to play good football since we started. In the game against ATKMB, we wanted to achieve certain things on the pitch, controlling the game and creating an atmosphere to get positive results. It’s a nice feeling when you win, but we want to continue it. I believe that there are two types of teams, there are “sometimes teams” or “sometimes players”, they do good things but only sometimes, but great teams do it all the time. We want to become an “every time team”. I was happy with the energy that we showed in the previous games, the way we fought for the points. This is how we achieve things in football, and we want to continue like this,” said the 44-year-old Serbian.

The Serbian tactician also talked about SC East Bengal, their opponents for tomorrow’s game, and how the team prepares for each game.

“All the games are different, we’ll never know how the games can be started. We always want to start the games focused and concentrated. We’ve been practicing both offensive and defensive styles and from time to time we have to change them to explore those styles depending on our opponents. East Bengal is a good team, and it could be our most difficult game, and we have to prepare for that.”

Asked about how there were no assists from the midfielders apart from Luna, the coach said,” We want our offensive players to score more goals but in football, it doesn’t matter who assists or scores, the most important thing is to create chances and scoring a goal in the end.”

Albino Gomes was taken off from the pitch after an injury in the last game. The coach gives us an insight into what happened to the goalkeeper.

“From the videos I’ve seen, he kicked the ball and stepped badly on his left leg and felt some discomfort in his knee. We reacted quickly and took him off the pitch. It will take a couple of days to evaluate the status of his injury. On Monday, he will do some more tests and after that, we’ll know the exact problem and the time for recovery.”

Ivan Vukomanovic is confident about Gill, who is their second-choice goalkeeper. He said, “We’ll be missing him[Albino], but we have other good goalkeeper options. Gill is a promising goalkeeper who is working hard. We have full confidence in Gill for tomorrow’s game.”

The coach also talked about Rahul’s injury and the rumor that he will be undergoing surgery.

“He has started his recovery, and he doesn’t need any surgery, so far we haven’t received any such information. We hope to see him back with us. He has missed a long session of our pre-season due to his obligations with the national team, and maybe we could have avoided that injury. We hope we can have them both [Rahul and Albino] back soon.”

Puitea shared his experience playing along with Adrian Luna
“It’s an honor to play with players like Adrian Luna, Álvaro [Vázquez], and Jorge [Pereyra Díaz]. They are so calm with the ball and always find a solution. They are an example for all of us Indian players,” said the 23-year-old midfielder.