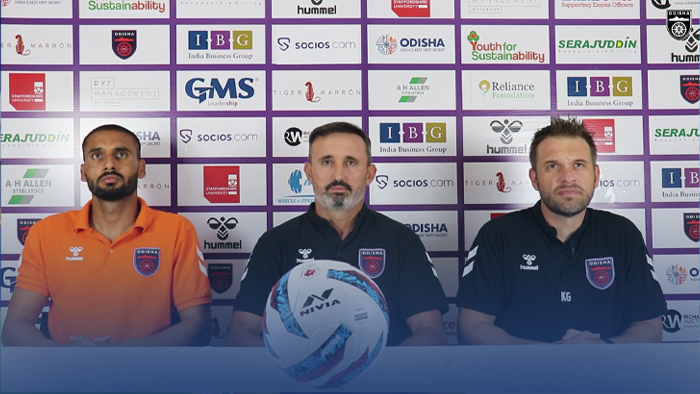 Odisha FC coaches and all the players are fully focussed for tomorrow’s game against NorthEast United FC. After winning the first two games, the Bhubaneswar-based side lost the third against Kerala Blasters FC last Sunday. Ahead of the game against the team from Guwahati, Head Coach Kiko Ramirez expressed at the press conference, “We won two matches and we lost the third. At this moment, we are focussed in rectifying the mistakes from the last match.”

“For this game, Jonathas De Jesus is improving, he is getting better and he is going to the training sessions. But, we need to wait till the last moment to decide if he is going to join the team or not. It was a hard week because more players have muscle injuries, muscle problems. Although not big but because they are playing matches and there are small gaps between the matches.”

Odisha FC has a philosophy of promoting and giving chances to young Indian footballers. Mizo lad Isaka Ralte started in the last game while Nikhil Raj, who made his Hero ISL debut, also went to score a goal in the injury time to reduce the deficit.

“We have to think depending on their effort. If they are performing and training well, ofcourse they have a chance to play. As a coach, I have trained junior teams and B teams and I am happy to give opportunities to the young players. We think that here at Odisha FC more players like these young players who are performing well, will be participating in the next matches.”

When asked about NorthEast United and the expectations from the next game, Assistant Coach and Head of Football Development Kino Garcia mentioned, “They are a strong team. They are powerful in the physical aspects and transitions. They defend in a compact way. They can put us in trouble but all the staff are prepared for the situation. Even we know that this is going to be a tough game and also they have good players. We are well prepared for the match.”

“We worked the whole week. When we were winning, we were calm. We lost the last match, we are calm because we are working in a straight way and we are focussing in the long-term project that we have in Odisha. We know this is a part of football – winning and losing. We could have won the other day and had clear chances to win but we couldn’t make it.

Goalkeeper Kamaljit Singh also accompanied the two coaches and answered a few questions from the media. He spoke about the three goalkeepers in the team and also regarding the coaching staff.

“We are looking forward to the next game. We are focussed. We know that they are tough competitors and the league can change very quickly. We are very focussed and we are taking things step by step. We are taking things calmly and hoping for the best,” the OFC custodian explained.“They are great coaches. Manu brings a lot of experience and we are very happy. We are doing pretty good under them and hope we can make good things coming. It’s a very very healthy competition. Everyday we push each other and every day we are improving under our coaches. It’s very good to have all of us together. We know that we all three are good and we are pushing each other. It’s making us better everyday,” he concluded.