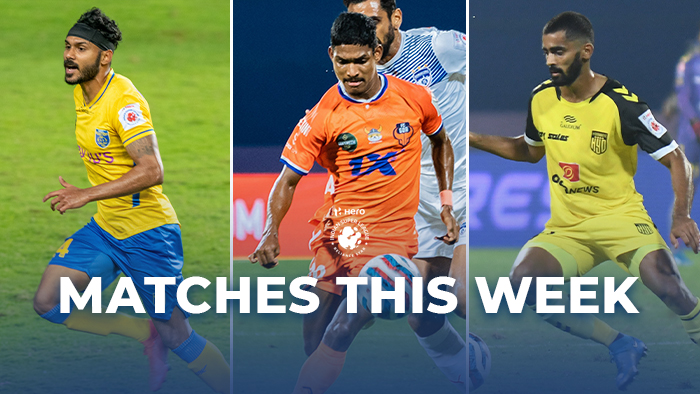 Yet another week of ISL football comes to an end. The past week saw the misery of ATK Mohun Bagan and Bengaluru FC getting continued, FC Goa managing two back-to-back wins, Hyderabad FC losing their first game of the season with Chennaiyin FC still being the only unbeaten team in the league.

The Indian football action will be going nowhere as another week full of action-packed games will be coming your way! Let’s have a look at this week’s fixtures.

Both the teams were tied on points at the 9th and 10th positions after the end of ISL 20-21. As usual, Kerala Blasters have come up with a new head coach while SC East Bengal, just in their second season in the ISL, has also come up with a new head coach after parting ways with Robbie Fowler. Both the teams will kick off this Sun-Sat week cycle football in ISL when they will face off at the Tilak Maidan.

Kerala Blasters have steered some hopes for its people while SC East Bengal is still winless, lunging at bottom of the table. They are currently holding the worst defensive record in the ongoing season.

The final two playoff spots of the last season were decided on the final league matchday among three teams. These two were the part of it where Northeast United went through and Hyderabad FC had to be disappointed after a great underdog run. They will face each other once again on Tuesday at Bambolim.

Hyderabad FC is currently with the second-best defensive record in the league. While Northeast United is on the back of a 1-0 defeat against Odisha FC and a major injury setback in the form of Gallego.

A usually ignored fixture, but keeping in mind the current situations, this could make up for an exciting encounter when the likes Jonathas, Aridai, Jerry, Vinit, Hector Rodas and Gaurav Bora will face the likes of Greg Stewart, Nerijus Valskis, Peter Hartley and Eli Sabia. A high-flying Odisha FC will be up against Owen Coyle’s gritty men of steel on Tuesday at the Tilak Maidan.

Going into the week, both the teams are holding the second and fourth spot respectively.

Chennaiyin FC might have won the ATK Mohun Bagan game to remain the only unbeaten team in the league. But the Mumbai City FC challenge isn’t going to be easy by any means, who are looking even hotter than last season under Des Buckingham.

After a disappointing start to the season for both the teams, both of them will look to bounce back when they will face each other at Bambolim on Thursday night. Both the teams are having winless runs for quite a time. ATK Mohun Bagan are winless for three games while Bengaluru FC are winless for five games in a row. In fact, it’s three lost games in a row for Bengaluru FC!

A not-so-good-looking attack against statistically the worst defense in the league. Khalid Jamil’s men will play their second game of the week when they will face the struggling side of Manuel Diaz. Whether they will find themselves in a better position on the table or will still remain at the bottom, is a thing that will be decided after their first game of the week.

These two sides were among the ones who did everything to place themselves in the playoff. Hyderabad FC are currently enjoying the second-best defensive record in the league. That too with an Indian Centre Back in the mix. FC Goa will be playing a game after one complete week of rest. After a few good defeats, they have managed to go into this week with two back-to-back wins. Will they come out of this game with a hat-trick of wins? To find out, tune in to the Saturday night thriller!