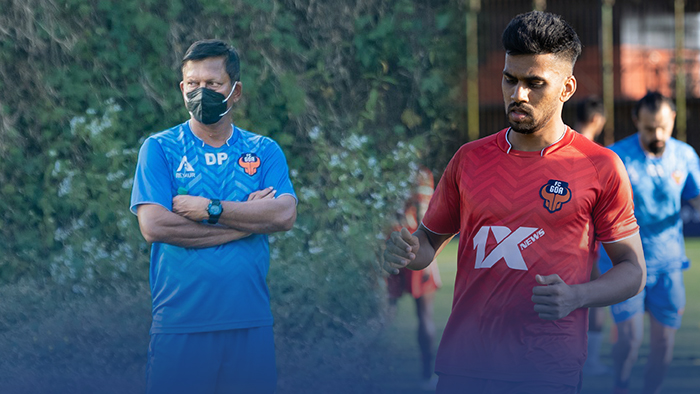 After a narrow loss against Jamshedpur FC last week, FC Goa go again in the Indian Super League (ISL) on Tuesday, when they take on Odisha FC. Currently placed ninth on the points table, the Gaurs have an opportunity to rise to eighth place by the time the full-time whistle blows if they are able to overcome OFC.

Their recent run of results, though, have not been great, resulting in doubts among fans – especially in terms of their philosophy and playing style. However, during the pre-match press conference, FC Goa head coach Derrick Pereira clarified that the team will stick to its possession-based style of football.

“I wouldn’t say that we would change our style. We have to, and will stick to our philosophy,” he explained.

“However, at times there will be a Plan B to explore the strengths and weaknesses of our opponents. More importantly, we also need time on the training pitch to work on such plans – which we rarely got during January.

“Hopefully things become better in the next month, and hopefully the results also get better as a result.”

FC Goa played well for the most part against Jamshedpur FC last Friday, but ultimately had no point to show for it. JFC scored with their only shot on target in the match, while three of FCG’s attempts deflected off the goal-posts.

Derrick Pereira said that the result was ‘disappointing’.

“We’re all very disappointed. We always go in for games with an intent to perform to the best of our abilities. Despite it being so, the ball wouldn’t go in. And as usual, some decisions also didn’t go in our favour, and that is also one of the reasons why we’re struggling this season,” the tactician explained.

In what can be deemed a matter of relief for the Gaurs, their midfield talisman Brandon Fernandes finally returned after a long injury lay-off. The Indian international started against JFC, playing for 82 minutes and looked the part – creating three chances.

“Brandon is one of our key players, and we missed him in many of our games due to his injury. Now that he’s back, you’d have seen how important he is to the team. His presence has made a lot of difference, and going forward, his performances will give us a lot of options in attack,” Pereira said when asked about the player.

While Fernandes is expected to feature again on Tuesday, FC Goa are yet to fully confirm the availability of Glan Martins and Jorge Ortiz.

“Glan had an individual training session yesterday, and today he will train with the team. Ortiz is also in the same situation and hopefully they will be included in the squad for tomorrow. We will be monitoring them closely today,” the head coach revealed.

The 59-year-old’s job at the club has not been easy of late, with the team struggling due to various reasons. The biggest of them, undoubtedly, is the outbreak of COVID-19.

“The month of January has been difficult for us. Players couldn’t go out because of the COVID-19 situation and as a result, training was also affected. After several days, we were allowed to get out of our rooms yesterday, to at least have our meals in the common dining area,” he narrated his recent experiences.

“Hopefully, this will help our players mentally, and help them focus on the footballing aspects of our remaining matches.

“In our past few games, our intent has been to go for the win and get those three points. It will stay the same tomorrow, with six matches remaining for us in the league stage,” Derrick Pereira signed off.