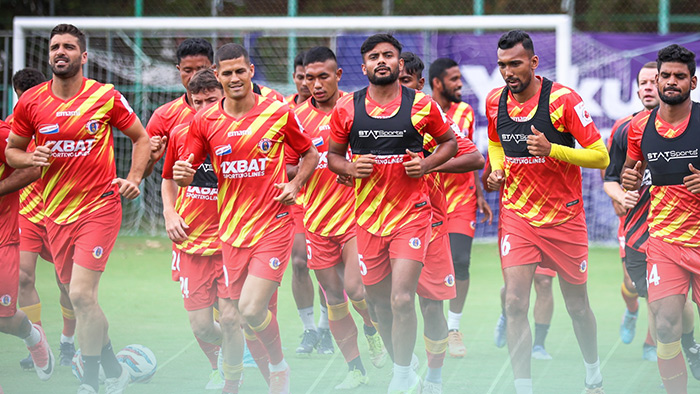 The second match week of the Hero Indian Super League (ISL) kicks off at the Vivekananda Yuba Bharati Krirangan Stadium, Kolkata, as East Bengal FC hosts FC Goa on Wednesday, October 12. The Gaurs will be playing their first game of the new season while East Bengal FC will be looking for their first win of the campaign after an opening-day loss against Kerala Blasters FC.

East Bengal FC Head Coach Stephen Constantine could tweak his system to amplify his side’s creativity in the final third. The Torch Bearers finished the last game with two shots on target. Both attempts on goal came via Alex Lima, who saw his first shot saved in the initial stages of the game and then scored with his second towards the end.

Striker Cleiton Silva failed to test the opposition goalkeeper throughout the match. The Brazilian’s strike partner Suhair Vadakkepeedika was also ineffective on the evening and substituted near the hour mark. East Bengal FC’s defence was able to keep the attackers at bay until the final quarter of the match. Kamaljit Singh produced seven saves but was ultimately beaten.

“It’s not about how you start the season. It’s about how you finish it. We will get better every week. The players will have a better understanding of what we are asking them to do. They are working very hard. I’m very happy with the atmosphere in the team”, said Constantine. “We have six solid foreign players and a group of Indian payers who have something to prove. So we will continue to work and, hopefully, we can grab the three points against Goa and move on”, he added.

Two years after announcing his retirement as a player, Carlos Peña returns to FC Goa as their new Head Coach, looking to turn things around. Last season, the Gaurs averaged 0.95 points per game. This was the first time they averaged below one point per game in the league.

In an effort to change that stat this season, FC Goa have roped in Noah Sadaoui, Fares Arnaout, Iker Guarrotxena and Marc Valiente, and will give these foreign players their first taste of the Hero ISL.

The Gaurs have also signed former Kerala Blasters FC striker Alvaro Vazquez. Former Odisha FC shot-stopper Arshdeep Singh and promising teenager Ayush Dev Chhetri, who was impressive in the Hero I-League last season with Aizawl. Only 11 of FC Goa’s players are above the age of 25, with most of them in the bracket between 20 and 25.

“We have the youngest squad in the league this season, but that is not a problem. That is a challenge”, said Carlos Pena. The Spaniard added, “We are going to see an FC Goa with a strong personality. A very competitive team. We are ready to start the season.”

The Torch Bearers and Gaurs have faced each other on four occasions in the Hero ISL. Two of those matches have ended in a stalemate and both sides have nabbed a narrow win over the other in the last two encounters. FC Goa are yet to win a Hero ISL game at the Vivekananda Yuba Bharati Krirangan Stadium. They have drawn four and lost two in six games at the venue.