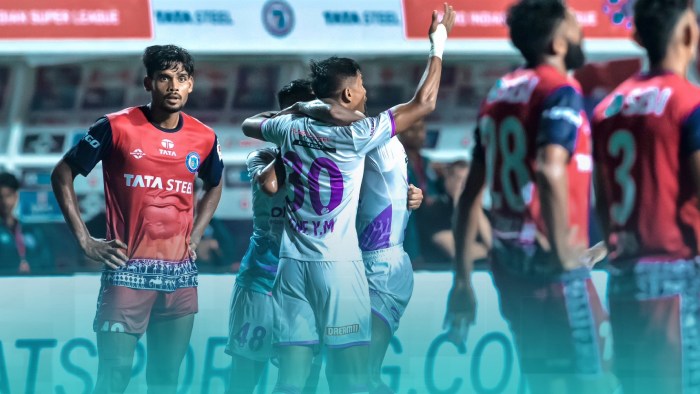 Odisha FC scored two late goals to seal a 3-2 win over last year’s Hero Indian Super League (ISL) league winners Jamshedpur FC at the JRD Tata Sports Complex in Jamshedpur. Daniel Chukwu and Boris Singh gave the hosts a two-goal advantage inside the opening ten minutes of the game. Diego Mauricio then bagged a brace, including the winner, and substitute Isaac Chhakchhuak got on the scoresheet to nab all three points for the Juggernauts.

Torrential rain delayed kick-off but didn’t dampen Jamshedpur FC’s spirits as they got their noses in front after just three minutes. Ricky Lallawmawma’s low cross from the left flank was blocked by Thoiba Singh but the rebound fell to Daniel Chukwu before the Nigerian smashed the ball into the net with his left foot.

In the tenth minute, The Red Miners established a two-goal cushion. Yet again, it was Lallawmawma playing a low cross from the left flank. This time it was Boris Singh who managed to get on the end of it for a tap-in at the far post.

The Juggernauts reduced the deficit seven minutes later. Raynier Fernandes rolled the ball towards Diego Mauricio near the edge of the box. The Brazilian was given too much space before he curled and tucked his effort inside the far post.

Farukh Choudhary sprinted down the left flank and his cross found its way to Wellington Priori. The Brazilian’s shot was brilliantly blocked by Amrinder Singh. At the other end, minutes later, Jerry Mawihmingthanga snuck inside the box from the right flank, took the ball on his left foot and was inches away from curling the ball into the top-left corner.

In the 67th minute, Pedro Martin found himself in a one-on-one situation with TP Rehenesh as the JFC defence searched for an offside flag. The Spanish substitute saw his effort saved brilliantly by the Jamshedpur FC shot-stopper.

Another thrilling match comes to an end!🤩

The match was then tied with two minutes in regulation time to go. Odisha FC substitutes Isak Vanlalruatfela and Isaac Chhakchhuak combined brilliantly on the right flank. Vanlalruatfela pulled it back for Chhakchhuak, who smashed the ball into the back of the net.

The comeback was complete in second-half stoppage time. Vanlalruatfela was involved in the move again as the 21-year-old picked out Mauricio with an inch-perfect ball before the striker fired in his second of the night and the winning goal for Odisha FC.

The Juggernauts and The Red Miners will both travel to the West coast on different dates to face Mumbai City FC in their next respective fixtures. The Islanders host Odisha FC on 15th October, Saturday, and will welcome Jamshedpur FC on 22nd October, Saturday.