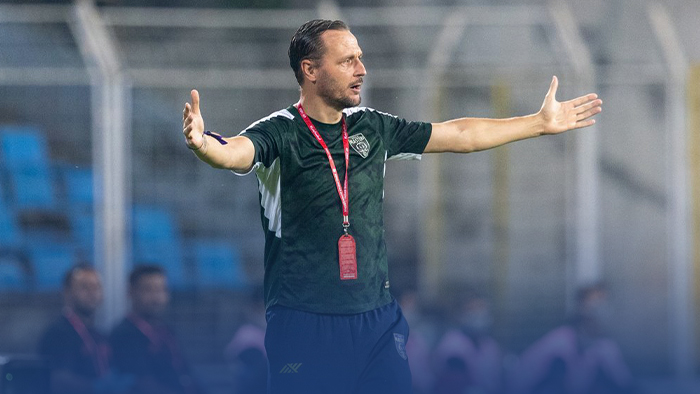 Kerala Blasters will return to action tomorrow against Bengaluru FC after an 18-day break. The COVID-19 outbreak took a toll on the Blasters camp. Ivan Vukomanovic, spoke to the press earlier today.

Ivan Vukomanovic believes that tomorrow’s game will not be like a normal football game owing to a lack of adequate players who are ready to play, but as professionals, his team will give it their all on the field.

“Yesterday I went out for the first time after 15 days of quarantine. If we were to play a kabaddi game tomorrow, then we’ll have enough players, 7 or 8 maybe even 10. But for a football game we don’t, we will use everyone we have because the show must go on and nobody cares whether we are ready or not. From our side, whoever plays will give their hundred percent. I don’t know if it’s going to look like a football game, I don’t think so. Perhaps we’ll have to put 3 keepers on the bench to get the required number of 15 players. We still don’t know if we are playing tomorrow.”

The coach expressed his displeasure with COVID-19 cases in their camp and the challenges of playing in these conditions.

“It’s just weird. We had to play our last game even after they knew that our opponents had positive cases, and the day after that it just started in our camp. From a professional standpoint, we have to go and do our jobs. The only thing that we care about now is the health of everyone in our group, half of our group got hit by covid. For me, this is the second time I’ve been affected by covid, and then you ask yourself what’s the point. As for physical and mental shape, we are like most of the people in this competition. We are just looking forward to our last game of this regular season and reuniting with our families. We were promised a secure bubble, but that was not the case. Many players have respiratory issues, they have problems with running on the pitch. Post covid time is very difficult if even climbing stairs will put you out of breath.”

Vukomanovic also talked about the players’ health difficulties and how the team no longer cares about the game since they have to prioritize their health.

“We didn’t prepare for the game tomorrow, we still don’t know if we are going to play. We didn’t get a chance to prepare because many players just joined yesterday and some of them will join today. We don’t care about the game tomorrow. We are just going and playing the game, that’s it. We still have positive cases in our camp. Some players had to go to the hospital because of respiratory issues. We don’t want to gamble and take risks with stupid things. Many players are not feeling good, and we are not going to push them to play tomorrow.”

Ivan Vukomanovic didn’t hold back in expressing his gratitude to the fans, who have been sending messages through social media to support their beloved club during these difficult times

“The most important thing is the love that we get from the fans, thousands of messages. We have to tell them that we love them because the love and support they’ve been giving us for the last two weeks is enormous. We love them and hopefully, we’ll see you soon when we play in Kochi in front of a full stadium. Hopefully, the time will come soon.”

The coach also highlighted how the players will be affected by the long break in training and how muscular issues may occur. Injuries at this point in the season mean the player will be out until the end of the season. Ivan is not willing to take chances with any of his players.

“When you don’t train for two weeks, and then you go out for a training or a game, then there is a huge chance that you are going to get injured because your body was not responding during those two weeks. Muscles respond and it’s not easy. Now we have to see how many of our players are capable of playing because we don’t want our players to get injured because injuries now would mean it’s the end of the competition for you, and then you’ll have a long break again until the next season. We’ll now try to see who is available, we don’t want to push our players to do stupid things, we don’t want to gamble and stop their season at the beginning of February.”

Ivan also stated that their opponents for tomorrow, Bengaluru FC, are a good squad that would have provided a good challenge if things were normal, but due to the circumstances, the team simply wants to finish the season and get through February.

“We are not thinking about the game, actually we don’t care. We are not ready to play football. Bengaluru is a great team, they have a great coach and great momentum as well. I think they are a team that deserves to be in the top 4, and I think by the end of this season they will be in the top 4. They have experienced players and national team players. If we were in normal shape, then it’d be a challenge, tomorrow in these circumstances we don’t care, we don’t think about it. Not just us, no team can play with a full squad now because of the circumstances. We just want to finish our job, go back to the hotel and do this through February and see what the situation is.”