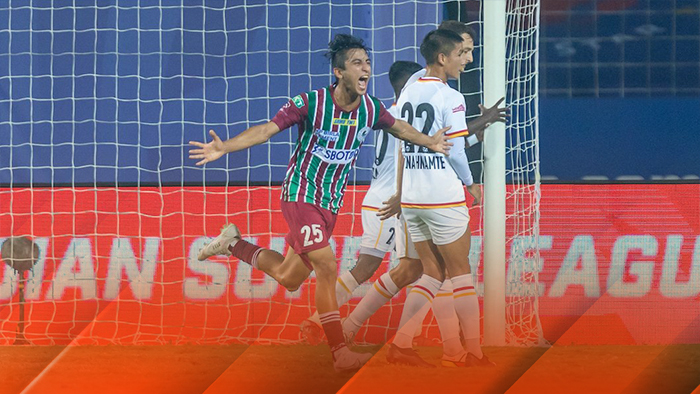 It was a breathless Kolkata derby as ATK Mohun Bagan left it late to secure a memorable 3 -1 win over arch-rivals SC East Bengal in the 2021-22 Hero Indian Super League (ISL) at the PJN Stadium in Fatorda.

The win was single-handedly delivered by the youngest ever hat-trick scorer in Hero ISL, Kiyan Nassiri (64’, 90+2, 90+3’), ironically the son of East Bengal legend Jamshid Nassiri. Super-sub Nassiri’s goals cancelled out the strike from Darren Sidoel (56’) who gave the Red & Gold Brigade a shock lead in the second half.

The Kolkata derby began with a measured approach by both teams. The best early chance fell to SCEB’s Marcelo Ribeiro five minutes before the half-hour mark who found acres of space behind the ATKMB backline. However, the forward sent his shot wide off the mark from a one-on-one situation. The Mariners also had a handful of chances as they strived to score the opener with Liston Colaco and Subhasish Bose coming close with their respective attempts.

The Mariners dominated more of the possession but a lack of end product meant that the outfits went into the halftime break on level terms. The second half began on a fiery note with Colaco hitting the top corner with a right-footed curler within minutes from the restart.

On the other end, Antonio Perosevic made Amrinder Singh pull out a crucial save on his near post with a strong left hand. However, the deadlock was finally broken against all odds by SC East Bengal through Darren Sidoel. The midfielder attacked the near post from a corner, got to the ball first, and guided it past the goalkeeper cleverly.

The Mariners scored the equaliser after the hour mark through Kiyan Nassiri, who came off the bench to make his second appearance for the club. A couple of minutes later, ATKMB then had the chance to take the lead from the penalty spot through David Williams. The Australian, however, managed to send his spot-kick into the stands. Hira Mondal then turned up and made a goal-line clearance to deny Colaco a goal.

Six minutes were added for stoppages by the officials which were enough for more moments of magic. A header from Williams hit the post and fell to Kiyan who made no mistake with the volley and scored the crucial goal. A minute later, he finally completed an iconic hattrick with an opportunistic finish deep into injury time. The cameo was enough to ensure three points for the Mariners.

SC East Bengal plays top-four candidates Chennaiyin FC in their next at the Tilak Maidan Stadium on Wednesday while ATK Mohun Bagan will clash against reigning champions Mumbai City FC at the PJN Stadium on Thursday.