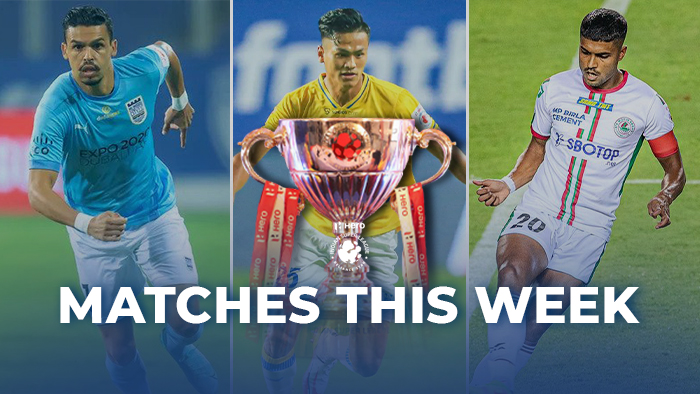 COVID scare has hit the ISL bubble as the ATK Mohun Bagan vs Odisha FC game has already been postponed due to a positive case in the ATK Mohun Bagan camp. However, it didn’t affect the further Saturday night game as FC Goa vs Chennaiyin FC went underway as usual.

Last week saw some surprises. SC East Bengal held Mumbai City FC to a goalless draw while Odisha FC took all the 3 points against the defending champions. Hyderabad FC became the table toppers for the first time in their ISL history. While SC East Bengal equaled the record of the longest winless ISL run (14) just in their second season in the league, despite holding their opponents Bengaluru FC and Mumbai City FC for a draw.

We are heading into the next week of ISL football with only 5 points separating the first and eighth position teams. This week also marks the beginning of the reverse fixtures. The league is going thick and fast!

Two of the only yellow teams will face each other at the Tilak Maidan to start this week’s Indian Super League action. Both the teams will fight it out to go top of the table. Hyderabad FC just needs a win to go two points clear of Mumbai City FC at the top. The same could be said about the Blasters, who are three points behind from the current league leaders while having an equal goal difference.

This game marks the end of the first half of the league stage.

When Bengaluru FC were among the top sides in the league (just a few years ago), Mumbai City FC were their biggest nemesis. Things have changed a bit now. Mumbai City FC are now way too better than Bengaluru FC to be called as the latter’s nemesis, says the table. The Islanders are at the top while Bengaluru FC are once again struggling to get things going. The Marco Pezzaiuoli-managed team is currently at the ninth spot with 10 points to their name.

This fixture also marks the beginning of the second half of the league stage with reverse fixtures in place. Mumbai City emerged victorious in the first meeting by 3-1.

The first half fixture between these two teams ended in a 1-1 draw. Despite two encouraging results under Renedy Singh, SC East Bengal are finding themselves at the bottom of the table with just 6 points to their name. They will be facing the currently third-placed Jamshedpur FC at the Bambolim.

Odisha FC’s previous game against ATK Mohun Bagan was postponed due to the COVID scare. As of now, both the teams are out of the playoff spots but it’s just a matter of a few points. Both the teams are separated by just one point but are two places apart. Shows the tight competition going on in the league right now. Both the teams will look to put themselves in a better position by getting positive results at the Tilak Maidan.

Kerala Blasters won the previous game against Odisha FC by 2-1.

This fixture is fondly remembered by Indian football fans for that 2-1 added-time thriller at Chennaiyin’s home ground in the 2019-20 season when Valskis was still at the club.

Chennaiyin FC are currently the only team to score less than 9 goals in the league. The team is once again going through some serious goalscoring problems. Which is why they signed Valskis back. Valskis has already started a game for the team where they lost 1-0 to FC Goa. Chennaiyin would be hoping that he does the same magic he did under Owen Coyle.

Hyderabad FC are currently the team with the joint least number of defeats. They have lost only one game in the league so far, which came against this same Chennaiyin FC side.

FC Goa has looked better in the last few games. But they are still at the bottom side of the table. However, they are currently just five points off the table toppers. While the Highlanders are struggling in different aspects, especially injuries. The previous meeting turned out to be a 2-1 victory for Northeast United FC, courtesy to once in a blue moon goal from Khassa Camara. That also happened to be the last game of Juan Ferrando as the Gaur’s head coach.

Both of them will look to improve their condition in the table.

There will be no more Saturday doubleheaders from now on. Saturday nights will be as usual.

ATK Mohun Bagan and Bengaluru FC will battle out for the Saturday entertainment. ATK Mohun Bagan are in playoff places after the shaky start but there is still no improvement in the condition of their opponents. They represented India in the AFC Cup group stages where ATK Mohun Bagan advanced to the knockouts only to face a 6-0 humiliation against Nasaf. The last encounter between these two teams saw an entertaining 3-3 draw.

Above all, ATK Mohun Bagan recorded a COVID case in their camp. Which resulted in the postponement of their game against Odisha FC. Clouds of doubts will be there ahead of this game.