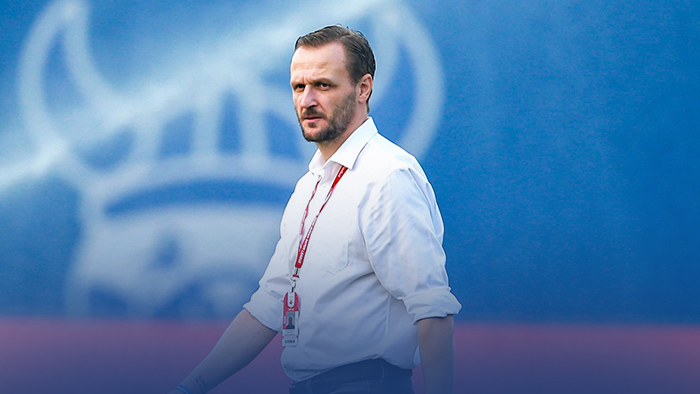 Kerala Blasters FC are all set to take on Hyderabad FC tomorrow. Both the teams played a 2-2 draw in their last games, which were against FC Goa and ATK Mohun Bagan, respectively. Blasters’ head coach Ivan Vukomanovic faced the media ahead of tomorrow’s game.

Ivan Vukomanovic was full of praise for tomorrow’s opponents, Hyderabad FC, ahead of the clash tomorrow. He said, “We have to praise our tomorrow’s opponents because they’ve been working consistently for two years. They have many young players and good foreign players who can help them develop. It is a very nice project. Hyderabad are on the top because they deserve to be there. In football nothing is gained overnight or in a game, it takes time to build and Hyderabad FC are doing a great job, clubs who have vision can achieve great things. If you stay together as a group, the coaching staff who works in the right way developing a team and improving that team, at one point you’ll surely get the results and that’s what our next opponents are doing. After seeing the first half, I think everyone will agree that Hyderabad FC deserves to be among the top four.”

Kerala Blasters surrendered two goals after holding a 2-0 lead over FC Goa in their most recent match. Coach talked about the possibilities of such situations in football, as well as the season as a whole, which appears to be more competitive than previous seasons.

“It’s not like we have to close the game as soon we score, we don’t have such things in our mind. 52 games have been played and around 176 goals scored. It’s not like it will be an easy game for the team who takes the lead, so far in the ISL, I haven’t seen a game like that. From the beginning of the game until the 95th minute, you have to fight, struggle, concentrate, try to win the duels, and try to win the game. We’ve seen different mistakes and misjudged situations in many games that changed the result, we got to see many teams concede in the last ten minutes. As a team, we were managing our game even after taking the lead or having a pleasant situation on the pitch, and then we concede goals and then have to struggle to keep things under control. Such things happen in football even on a top-level, recently in the Premier League, Chelsea was trailing 2-0, after that it became 2-2 and both teams were fighting until the end. You can see such things in every competition around the world,” said the 44-year-old tactician.

“As we are entering into the second half of the season, many teams are going to struggle with fitness level and mistakes. Teams will have difficult moments, and I think we’ll see more goals. Teams will have to fight to place themselves high on the table. We as a team don’t have any fixed position, we are going game by game, we are focusing on our goals and objectives. For us, every game is like a final. There are no easy games for us, and we have to fight like it’s the final. We have to fight from the start until the final minutes of the game. We still have many games left, we have to face all the opponents once again. Securing the lead is something that everyone wants but in this league, we’ll know what will happen and anything is possible,” he added.

Vukomanovic also spoke on the team’s strengths and flaws, as well as how KBFC can become stronger by striking the right balance.

“Like all other teams, we have our strengths and weaknesses, and we are dealing with them. We are a team that’s trying to find balance, trying to concede fewer goals, and also organizing our playing style and score goals from open play, I think we are the team that scored most goals playing like that. We always have to find a balance between attack and defense. We have to make our strong points even stronger and use the weak points of the opponents. During a game, we’ll never know what will happen and in that game, we have to deal with certain moments. We are in the middle of one good process, the boys are understanding the way of working, and I am glad about the improvements they’ve made so far. We are not concerned, we have full confidence in all of them, and we are happy with the work they are delivering. We’ve been together for five months and there are two more months of the regular season. As a team, we are strong and all teams will have good and bad moments, but we have to continue. We have to improve in every possible way collectively and individually.”

Ivan also discussed the possibility of adding a new player during the current transfer window. The coach also stated what they are looking for in a player.

“Our management is in talks with interesting options. From our perspective, we are a team that’s in a humble situation, sometimes we can’t afford some players because we have to be careful with our budget. If there are players who would bring something extra to the team then we will act and try to sign those players, but if by signing certain players we get nothing extra, then there is no point in signing them because we already have our group of boys who are working hard. If there are reinforcements, then we will act, but if we judge that those options can bring us nothing extra then it’s just changing players. We have to be clever. And about the foreign players, we are happy with all of them, and we will continue with them. Bringing a new foreigner into the bubble is difficult, it will take at least two to three weeks for them to adapt to the climate and our way of work, and they will only play three or four games in the end. And about exchanging foreign players within the bubble, no, I would like to keep this group and keep building.”