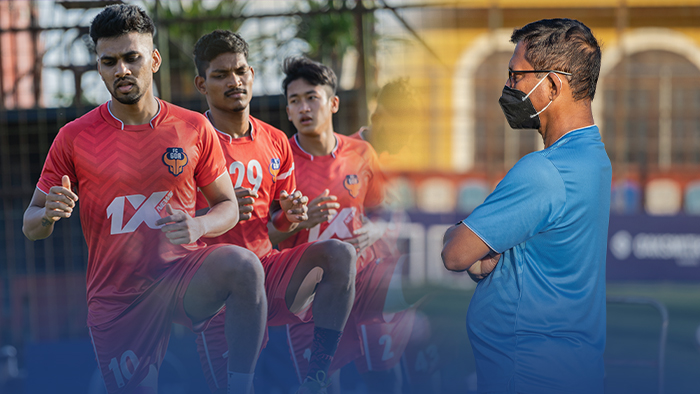 FC Goa‘s winless streak in the ISL stretched to 4 games after a 0-1 loss to Jamshedpur FC on Friday night. Despite dominating during major periods of the game and keeping the JFC attackers at bay for most of the game, the Gaurs failed to take home any point.

Head Coach Derrick Pereira later shared his thoughts at the post-match press conference, where he opined that FC Goa have been ‘unlucky’ throughout their ongoing league campaign.

When asked if the Jamshedpur game was a great opportunity to earn at least a point, he said, “Absolutely. We did everything. We started well in the first 15-20 minutes. When they (Jamshedpur FC) started exerting more pressure, we kept our composure.

“In the second half, we tried our best to score. We struck the post at least twice. Throughout this season, luck hasn’t been with us, and things haven’t gone our way. We have to get back now, and look for our next win,” he further added.

Thoughts on the goal

The Gaurs did a good job in preventing JFC’s star attackers from putting forth a convincing display. The likes of Greg Stewart, Daniel Chima Chukwu and Ishan Pandita were silent for most parts of the match, registering just one shot on target. However, that shot – made by Chima – also made all the difference.

The goal could have been avoided, said the 59-year-old tactician.

“Some of our players were claiming off-side (on Daniel Chima Chukwu). I don’t know, I have to get back and take a look. Even if that was the case, we cannot switch off just like that. And that’s what has been happening all season. We’ve been conceding goals due to some silly mistakes, and then we struggle to get back to the game,” he explained.

FC Goa were handed their earliest setback well before the match started, when Jorge Ortiz – initially announced as part of the starting XI – had to be replaced following an injury during warm-ups.

“Ortiz had a slight strain. We took care of him and he wanted to start the game but we didn’t want to risk him. He couldn’t carry on after the warm-up. It was risky, so we pulled him out,” Derrick Pereira said. It was Airam Cabrera who replaced the Spaniard in the playing XI.

One silver lining for the Gaurs was the return of Brandon Fernandes. The Indian international was sidelined due to injury since October 2021, before making his campaign debut against Bengaluru FC last week.

On Friday, he made his first start and played 82 minutes, during when he made three good chances for his team.

“Brandon is a quality player. With him around and with other players like Alberto and Princeton, we were moving the ball well, and he is a player who can create opportunities for other players. His set piece delivery is deadly. So he’s very, very important to us,” the FC Goa head coach said.

“So. I was happy that he played 80 minutes, but considering the goal, I had to carry on with him for another 10 minutes.”

The team from Goa remain in ninth place in the ISL 2021-22 standings, with 14 points from as many games (three wins, five draws and six losses). They have registered only one win in their last nine matches this season. The remainder of their campaign would be a ‘do-or-die’ phase for them and Derrick Pereira also agreed to it on Friday night.

“But things are not happening the way they should have been. There are some mistakes, individual mistakes here and there which put us down,” he signed off.