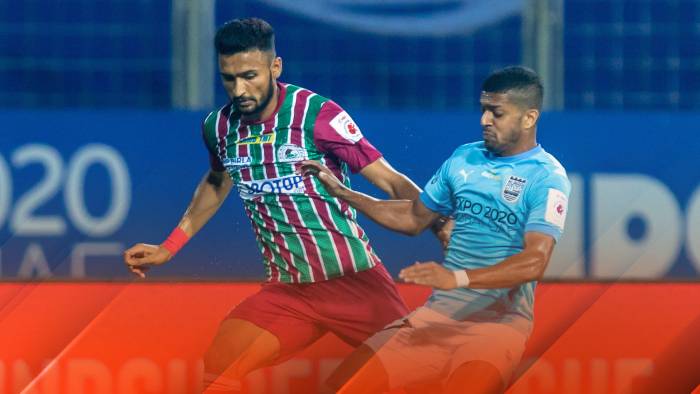 Heavyweights Mumbai City FC and ATK Mohun Bagan displayed their full repertoire but were left high and dry in the end with a 1-1 draw in the Hero Indian Super League at the PJN Stadium in Fatorda here on Thursday.

David Williams opened the scoring for ATKMB in the ninth minute but an own goal from Pritam Kotal in the 24th minute restored parity for Mumbai. Both teams had their fair share of chances in each half but could not produce a winner. The result means ATKMB could not break into the top-four, remaining fifth with 20 points from 12 games.

Mumbai’s winless run stretched to seven games as the reigning champions remained sixth in the table with 19 points from 13 outings.

ATKMB looked in control from the off and it did not take them long to nose ahead. The brilliant Liston Colaco was hacked down on the left channel but despite green and maroon shirts’ loud appeal, the referee did not give a free-kick. Mourtada Fall then passed the ball to Ahmed Jahouh who dilly-dallied with Hugo Boumous pressing him hard. Williams latched on to the loose ball, skipped past the keeper and put it past him.

Colaco proved to be a menace for the Mumbai City FC defence as he made constant forays and looked threatening every time he bombed forward. ATKMB kept knocking on the door as Colaco found the wall thrice to underline his dominance.

Mumbai tried hard to wrestle back the advantage and saw the ball for a brief period in which Cassio Gabriel’s attempt was thwarted by Tiri but Kotal failed to keep out a Bipin Singh cross, deflecting the ball into his own net.

After the cooling break, Williams had a chance to double his tally but his sharp header from a Liston Colaco free-kick that fell to him after hitting the wall came off the woodwork.

Mohamad Nawaz then had a moment to forget when he charged out of his area in an attempt to head the ball clear but could only manage to send it as far as Boumous but the Frenchman was closed down by blue shirts.

In the second half, Mumbai took off Diego Mauricio who had a forgettable debut for the Islanders for Igor Angulo. Soon after, Boumous shot wide after Manvir Singh sent in a low cross from the right and Williams sold a cute dummy. At the other side, Angulo headed wide from Jahouh’s cross.

At the hour mark, Mumbai’s new signing Lallianzuala Chhangte came in for Vikram Pratap Singh and was in the thick of things almost immediately as he flicked on a ball from Gabriel into the path of Angulo but his header was saved well by Amrinder Singh.

Kiyan Nassiri, who scored a breathtaking hattrick coming off the bench against SC East Bengal in the Kolkata Derby the other day, replaced Asutosh Mehta in the 85th minute as both sides looked for the winner.