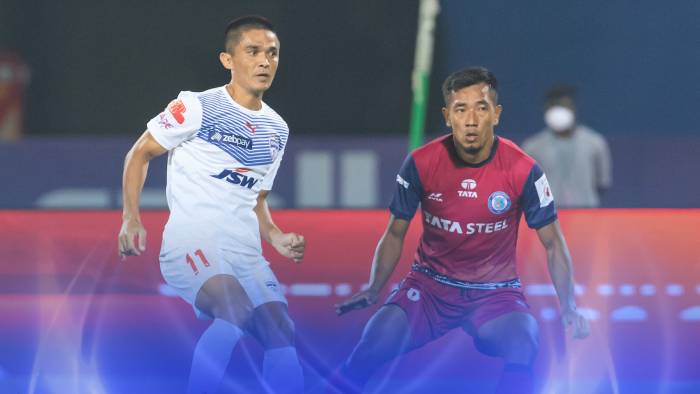 Bengaluru FC will look to upset Jamshedpur FC‘s applecart and sharpen their playoff aspirations when the two sides meet in the Hero Indian Super League at the Athletic Stadium in Bambolim on Saturday.

Gurpreet Singh Sandhu, who celebrated his birthday on Thursday, has looked his usual self in goal for the former champions with Bengaluru keeping four clean sheets in the last seven games. Three of those four clean sheets have come in the last four matches. They have only leaked one goal in that period. They have become more compact of late. They have let the opposition have the ball more in the last 4 matches and this can be seen through their possession numbers.

Roshan Singh Naorem scored his maiden Hero ISL goal in the previous game and has looked good this season too. Only three defenders have had more goal contributions in a season than Roshan Singh, underlining his impact not only at the back but in attack as well.

“Jamshedpur are a physical team, they have a new player in (Daniel) Chima who brings a lot of speed, and can score a lot of goals. Our last game was a good, tough game, but I think we did a little bit more than them on that night,” Blues’ head coach Marco Pezzaiuoli said at the pre-match press conference when asked about Jamshedpur.

“I think it will be a tough game for sure, but now after quarantine, we’ve had three games in seven days. We are still not back to our best, condition-wise, and that’s something we want to work towards,” he added.

For Jamshedpur, their rock-solid defence is one of the main reasons for their success. The Men of Steel kept a clean sheet in their last two games and have only conceded four goals in their previous six matches after shipping eight in their first five outings.

Jamshedpur have won their last three games, spread over two weeks, to sit four points adrift of league leaders Hyderabad FC in second position but with two more games in hand. A win will help them snap at Hyderabad’s heels but in Bengaluru, they will face a rival who have found their mojo back.

“He is here because of his qualities. He is a terrific footballer and has won leagues at a very high level. He has played in some tough leagues. He has shown what a good player he is. He is a great addition,” Coyle said.

“We know the quality that we have. What we want to do is see the job through. We have the opportunity to attain the points and want to continue our winning run,” he added.
The last time the two sides met, it was a goalless draw but with stakes higher this time around, it promises to be a battle to look forward to.