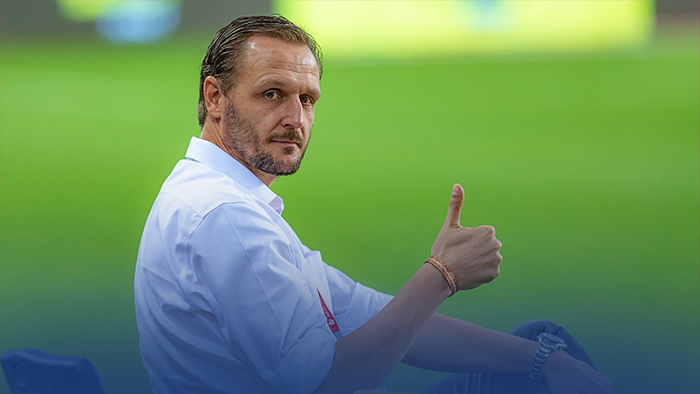 Kerala Blasters young winger Rahul K P was out of action for a long time, when asked about his availability Ivan Vukomanovic said, “Rahul K P is not available for selection yet, he’s still working with our physios and we’re hoping to have him available soon because he’s a player who can add something extra to the team.”

Also, he added to that, “ We are very happy that we finished the game without any injuries after sitting in the room for 15 days. But we have to work hard because February is very tough.”

January Transfer window was pretty active for ISL but Kerala Blasters didn’t make any move. Ivan shared his thoughts on the inactivity of his team in the transfer window, “It was not easy to sign someone and then complete his Quarantine and say now you’re a part of our team, also we are happy with our group of boys If anything we’ll make some changes in the summer window. Let’s see.“

Normally the Kerala Blasters supporters don’t take the defeats so nicely and especially when it is against their foes but contradicting that the fans were not disappointed about the defeat, instead, they supported the team even more. Ivan Vukomanovic had a lot to say about their loyal supporters, “From the start, they were amazing, for us being in the bubble and still feeling their love from Kerala. For me the boys every day, they talk about the fans and they’ve them close to their hearts it’s an amazing feeling. We wanted to build the kind of mentality to fight till the end for everything. We were happy because the boys showed that spirit. If a player is coming to Kerala Blasters they’ve to know that they’ve to fight for everything till the end. Kerala Blasters is a big family and if it’s an away game or home game or whatever fixture it is, we have an obligation to this team to the badge and the fans. And we can’t wait to play in front of our fans because their support will give us wings and that extra motivation.”

Three of the main players of the team have accumulated three yellow cards and are on the verge of suspension, Ivan was asked if he was worried about the potential suspension and answered calmly, “No, I’m not worried. We’ve very good young players who can fit into the team. That’s how we improvise, yellow cards are normal in football. Tomorrow Puitea is suspended but we’ve young players who can play in his position.”

After the schedule is revised, Kerala Blasters have to play 6 games in February which is hectic. Ivan says, “It will not be an issue only for us. It’s an issue for the whole league. Speaking about muscle injuries, it means it’s done. His season will be finished. In February we have to rotate our players to reduce Injury risks. We are happy with their improvement in fitness, their fitness level is improving from preseason but we got a 15 days break in between. We will try to manage because we can’t lose any of them to long-term injury.”

Adrian Luna is one of the best foreign signings of the league this year and he came on a two-year deal with Kerala Blasters. He was asked whether he’ll rethink coming back to India next year and without thinking much he answered, “Yes as you said I have a two-year contract with the team and my plan is to come back to India next season also and help the team. I hope all our foreign players join back so that we can have our base the same. I want to fight for this team”.

He was also asked about his goal of winning the championship to which he said, “We don’t want to pressure our players saying that we need to win this. But of course, we are aiming to win everything but we’ll go game by game.”

“We are mentally exhausted but we have to prepare for the games and we love that. We enjoy playing the games so we have to keep on working for that” concluded Adrian Luna.