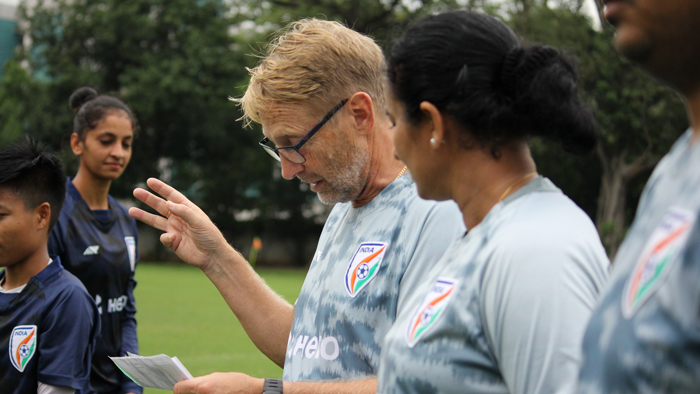 The Indian Women’s Senior National Team is set to leave on Saturday (November 20, 2021) to play in a 4-nation International tournament in Manaus, Brazil. India will lock horns with Brazil, Chile, and Venezuela in their three matches, all of which are part of their preparation for the forthcoming AFC Women’s Asian Cup India 2022.

Head Coach Thomas Dennerby outlined the importance of putting in “three good performances”, mentioning “the opportunity will allow us to evaluate ourselves.”

“This tour and everything we have been doing in the past two months is about the preparation for the AFC Women’s Cup which kicks off in January. It is all about finding out whether we are doing the right things on the pitch and evaluate our performances in each and every department,” Dennerby stated prior to the team’s departure.

“We are going to play three good quality games now, the first game against Brazil will be important. The second game against Chile and the third game which will be against Venezuela, both are good teams but not at the level of Brazil. The most important thing is to come home with three good performances and nothing else,” he added.

This is the first time that any senior Indian Football Team will play against Brazil, and the excitement within the camp is running high. However, captain Ashalata Devi maintained focus on the objectives ahead.

“There is a lot of excitement in the camp because Brazil are a very good football team, and we follow a lot of the Brazilian players ourselves. We are happy to play against the Brazilians. We admire them and there is a lot to learn from them as well. It is a big motivation for all of us,” she maintained.

“But we also have our own objectives to reach on the pitch, and we will try to reach them as best we can. I always tell the girls to respect every opponent no matter their ranking, but never to fear any of them,” she expressed.

This will be the 6th country the Indian women’s team will be visiting this year.

The team had been camping in Jamshedpur with infrastructural and logistical aid from the Government of Jharkhand over the last four months.