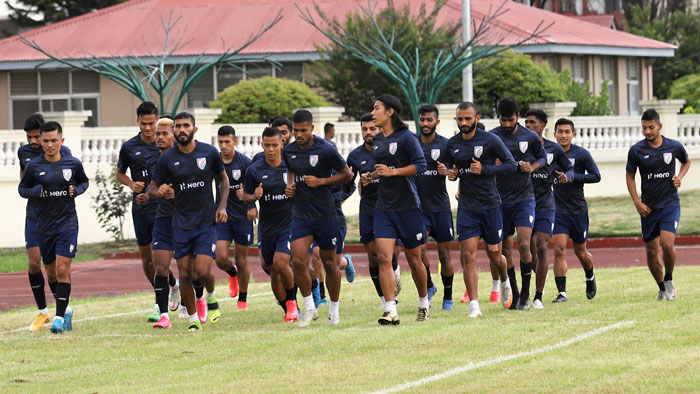 It’s matchday minus one for the first International Friendly against Nepal, and the jaws are toughening. The discussion among the Blue Tigers hovers around the match. Even on the dining tables, football is being discussed — the situations during match practice and the positioning which they pre-empt will repeat itself in the match.

“We are happy to be here and happy to be together again. These two International Friendlies will help us prepare for the forthcoming SAFF Championship in the Maldives next month. I just know these games will be good and we need to learn on the pitch,” Head Coach Igor Stimac averred.

Blue Tigers captain Sunil Chhetri thanked the “ANFA and the Government of Nepal for the hospitality and the invitation to play in Kathmandu during these tough times.”

“We understand the situation in the world. The hospitality has been wonderful and the opportunity to play International football is soothing for us. We want to give the best account of ourselves and get a good start for the season. Nepal are a tough opponent and we want to give as much as we can to the coach,” Sunil maintained.

The underfoot conditions at the practice ground were understandably left heavy, courtesy of the torrential downpour. There are dark clouds overhead threatening to deliver anytime. “I hope that we don’t suffer heavy rains during the matches so that we can play some exciting football,” Igor maintained.

In the last meeting between India 🇮🇳 and Nepal 🇳🇵, @SandeshJhingan and @jejefanai were on target as the #BlueTigers recorded a 2️⃣-0️⃣ win at the Mumbai Football Arena in 2017! 🏟️

“We have analysed Nepal as an opponent and the kind of progress they made in the FIFA World Cup Qualifiers. They have put on display that they can play quality football and can defend as a team. My colleague has done a good job and there are a lot of young players in the squad,” Stimac explained.

Nepal coach Abdullah Almutairi admitted that he has worked a lot on “changing the mentality of his players.”

“I don’t want to make the people happy; rather I want to make them proud. We have been training for the last two months and there are a lot of youngsters in the squad. Our target is to win the SAFF Championship in the Maldives, and eventually qualify for the AFC Asian Cup China 2023,” he informed. “We don’t care about FIFA Rankings. It will not be easy for them, as surely it won’t be easy for us.”

Talismanic captain Sunil Chhetri is the crowd favourite. Right from landing at the airport to the team hotel to the practice sessions, locals request him for a click. The other evening, two football officials even waited at the hotel lobby for a long time to get clicked with him. The captain, while maintaining the social distance, smilingly obliges all.

“I will admit that I have a soft corner for Nepal. But, it ends the moment I step on the pitch. My mom is from Nepal and whatever sporting culture and discipline has been inculcated is all because of my mom,” he smiled.

“Nepal has always made it very difficult for us on the football pitch, and we are not expecting anything less. Playing Nepal at home and outside Nepal are two different things, and let’s not forget that they are the home team here,” Sunil stressed.

'Happy' #BlueTigers gear up for first friendly against Nepal 🇳🇵🐯

Stimac expressed that the boys need to prove themselves on the pitch to strengthen their chance of making it to the SAFF squad. “We didn’t have players from ATK Mohun Bagan and Bengaluru FC in the camp in Kolkata, and most of them are a regular part of our squad. They know what is expected. Most importantly, they are in good physical condition,” the coach quipped.

Meanwhile, Nepal captain Kiran Kumar Limbu highlighted that coach Abdullah has been motivating the boys a lot. “He has educated us that we need to gain more strength and get stronger, as much as he is working tirelessly to make us mentally stronger players.”

The kick-off tomorrow (Thursday, September 2) is at IST 5.15 pm and the match will be telecast live on the Indian Football team’s official Facebook page @TheIndianFootballTeam.