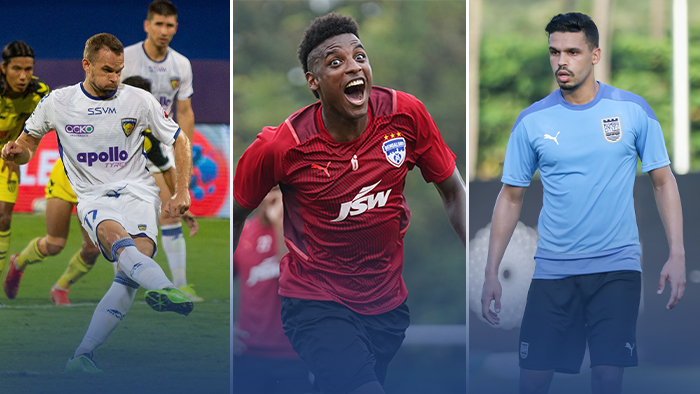 The beginning of the Indian Super League (2021-2022) started with an exciting match between ATK Mohun Bagan FC and Kerela Blasters FC, which ended as a victory for last year’s finalist ATK Mohun Bagan. Hugo Boumous was the hero of the match and his performance caused a lot of problems to Kerela Blasters FC midfield as well as the defense. He started his campaign this season by scoring 2 goals. In the first match only it is seen that he is perfectly adapted to Antonio Lopez Habas’ system of playing. Boumous provided the creativity in midfield due to which ATK Mohun Bagan created a lot of chances in the match. The 26-year-old has a knack for creating something out of nothing. Boumous link-up play with Krishna and with Liston was very much effective in the match. It was clearly seen how good ball career was and how easily dribble past bodies with ease. Here are some of his stats from the match.

Accurate Passing in own half -100%

Accurate Passing in Opposition Half-44%

He was easily able to dictate play and was giving balls to the likes of Krishna and Liston who created some really quality chances. It will be amazing to see how he performs in this season and helps ATK Mohun Bagan to reach the top.

Mumbai City FC started their Indian Super League campaign rivals FC Goa, which ended in a 3-0 victory for the defending champions. Igor Angulo and Ygor Catatau put their name on the scoresheet. But the standout performer was the debutant in the Indian Super League Cassio Gabriel. From the beginning of the match, Cassio was very effectively pressing the defense of FC Goa and won many duels, he was causing a lot of problems to FC Goa defense as well as the midfield, he was providing many through balls to Igor Angulo which didn’t result in a goal. Here are some of his stats against FC Goa –

Accurate Passing in Own Half -81%

Accurate Passing in Opposition Half-80%

He is a very versatile player, he will be crucial for Mumbai City FC in the upcoming matches

Hyderabad FC started their Indian Super League campaign with two-time champions Chennaiyin FC. Even though Hyderabad FC was way better than Chennaiyin FC. But a penalty scored by Vladimir ended the match in the favour of Chennaiyin FC. But João as a captain was outstanding in the match helping the team to create some quality chances from his smart passes and equally contributed to the defense. Whenever Chennaiyin FC was going for a counter attack he was the one who was stopping the counter by crucial interceptions. Here are some of his stats-

Accurate Passing in Own Half-100%

Accurate Passing in Opposition Half-67%

Last season also, he played a key role for Hyderabad FC. As a captain of the team this year he will definitely perform well in the upcoming matches.

The former Indian Super League Champions started their campaign mostly with a new bunch of players against the last year’s semifinalist Northeast United FC, which ended in a 4-2 win for Bengaluru FC. Bruno played a crucial role in this victory as he completely dominated the midfield having the most number of touches of the ball and having the most number of passes of the ball. By his line-breaking passes, he was able to break Northeast United FC midfield and gave strikers an amazing opportunity to score. Even though sometimes Bengaluru FC’s defense was shaky he used to join the partnership of Costa and King to help them in defense. Here are some of his stats of the match –

Accurate Passing in Own Half-90%

Accurate Passing in Opposition Half-78%

He will play a crucial part in the midfield of Bengaluru FC and with the help of his creativity, he will excel in the upcoming matches.

The two-time Indian Super League Champions started their campaign against Hyderabad FC which ended in a 1-0 victory for Chennaiyin FC. Even though Hyderabad FC was the dominant and better team that night but we’re not clinical at all. Chennaiyin FC midfielder Koman played a key role in the midfield helped his teammates to be compact and they forced Hyderabad FC wide At 66th minute a foul on Aniruddh Thapa in the box earned a penalty for Chennaiyin FC which Koman was able to convert it into a goal. He was very vocal on the pitch continuously communicating with his teammates. Here are some of his stats of the match-

Accurate Passing in Own Half-77%

Accurate Passing in Opposition Half-56%

Even though he needs to improve in his passing but will play a crucial role in the midfield of Chennaiyin FC in the upcoming matches.

After a disappointing loss in the opening match against ATK Mohun Bagan, Kerala Blasters tried to bounce back in the second match against Northeast United FC, even though the match ended in a stalemate but Kerala Blasters FC was the better side in the match and the standout Indian player was former Gokulam Kerala FC player Vincy Barretto. Because of his speed and agility, he was causing a lot of trouble for Northeast United FC and he was forcing the NEUFC players to foul him and created some quality chances for Diaz and Vazquez. Even after the match, the head coach Ivan Vukomanovic appreciated him for his performance. Here are some of his stats of the match-

Accurate Passing in Opposition Half-81%

Even though he has scope for improvement, he can be crucial for upcoming matches in the Indian Super League.

Jamshedpur FC started their campaign of Indian Super League against SC East Bengal FC which ended in a stalemate. In the second match, Jamshedpur FC faced the league favorites and Durand Cup Champions FC Goa and they completely outperformed them. The match ended in a 3-1 win for the men of steel. The partnership of Greg and Valskis proved to be vital for this victory over the Gaurs. Even though Greg was not fully fit still he left his mark in the match. His intelligent movement created a lot of threats for the Gaurs. He provided a beautiful assist to Valskis. Due to his intelligent movements, he won many fouls and he made most of the players frustrated. Here are some of his stats of the match

Accurate Passing in Opposition Half-65%

Even though he is a new signing for Jamshedpur FC this season and trying to adapt to the conditions. He will surely be the man to look out for this year.

After a disappointing start to the campaign, Northeast United FC tried to bounce back against Kerala Blasters FC, the match ended in a stalemate. Even though NEUFC didn’t create many opportunities to score a goal but they were very organized and defensively compact at the back, and the standout performer for NEUFC was none other than their captain Hernan Santana. He made a very crucial impact in the match and properly did his defensive duties, he was even seen encouraging young players beside him and his work rate was exceptional in the match. Here are some of his stats of the match

Accurate Passing in Own Half-86%

Last season he played a crucial role for the defending Champions Mumbai City FC, it will be exciting to see him perform better this season with NEUFC.

Odisha FC started their Indian Super League campaign with a win over the former champions Bengaluru FC in a thrilling match. Even though the official man of the match of Javi Hernandez but Vinit Rai as a captain was spectacular in the midfield, he led the team with courage. He has undoubtedly performed the role of the captain very well, he was very vocal and demanding on the pitch Not only did he guide the fellow Indian players but also the foreign players. He was outstanding in his defensive duties due to which Odisha’s defense was more comfortable in winning duels. Here are some of his stats of the match

Accurate Passing in Own Half-87%

Accurate Passing in Opposition Half-44%

He will be a key part of Kiko’s plan for this season as a player and as a captain, he will definitely impress everyone.

Jamshedpur FC started their campaign with a stalemate with East Bengal FC. Even though East Bengal created some good chances to score it was denied by the solid defending of the captain Peter Hartley. In the second match against FC Goa, Jamshedpur FC bounced back with a solid performance and the match ended by a 3-1 win for the men of steel. And FC Goa didn’t Create many chances, the main reason was the man at the back Hartley. Hartley with his accurate long Balls helped Stewart and Valskis to score goals and create some quality chances. Due to his physicality and strong Heading power he can also score from setpieces also. Here are some stats of his in his two matches

Accurate Passing in Own Half-86%

His partnership with Narender and Eli Sabia will prove to be the best partnership in the league. So the teams first will need to get past them to score a goal.