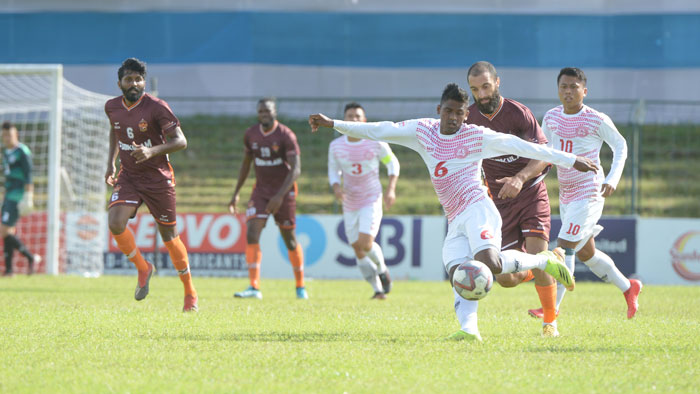 Defending Champion Gokulam Kerala’s opening game of the 130th Durand Cup ended in a 2-2 draw against Army Red Football Team. The Malabarians started on a positive note, courtesy a spectacular goal from long-range by Ghanaian Rahim Osumanu but failed to capitalize in the later stages.

It was a windy day at Kalyani and both teams had started well. Gokulam secured the lead in the the 9th minute as Rahim scored a stunner.

However, a major turning point came as Gokulam Kerala FC’s goalkeeper Rakshit Dagar collided with Army Red’s Mukesh Kumar. It was ugly and Ajmal PA had to take Rakshit’s place.

The momentum of the game changed after that as Jain P quickly scored the equalizer for the regimental side.

Minutes before half time, Bikash Thapa scored the second for Army Red and they had the all-important lead going into the second half.

Gokulam played an attacking game in the second half and even had a brilliant opportunity to score when their captain Sharif M Mohammad’s shot missed the target by a small margin and went over the crossbar onto the nets. He made up for it though later, courtesy a penalty.

The Malabarians had several close chances in the final quarter but failed to convert any and would be the more disappointed side for sure. Their next game is against Hyderabad FC who are in red hot form.

The Red’s P Christopher Kamei was adjudged the Man of The Match. He expressed his feelings post match saying, “They are the defending champions and even our coach had told us that it will be a tough match but still, we gave a good fight. We had made a strategy to play a defensive game early on and then gradually gain confidence. They are an I-League team and are strong on the tactical side but still we played well.”

He also added, “We still have 4 points and are not losing it. We have time to recover and give our best for the next game.”