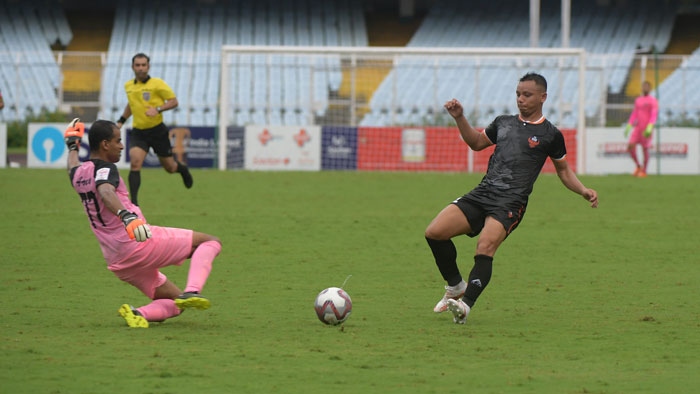 Goals from Alberto Noguera Ripoll (35’) and Devendra Dhaku Murgaokar (59’) sealed the deal for the Gaurs on a rainy afternoon in Salt Lake.

As is often the nature of football, the score-line doesn’t reflect the chances Army Green created – it rather shows how wasteful they were in front of goal.

The team in white and green almost caused a huge upset in the 15th minute, when a cross from Vikas Zanje took a wicked deflection and almost caught Goa keeper Naveen Kumar off-guard. Luckily for him, the woodwork saved his blushes.

Juan Ferrando’s side on the other hand were far more clinical when opportunities presented themselves. In the 35th minute, a beautiful through-ball from Goa’s Makan Winkle Chote put Alberto Noguera through on goal. When it came to beating the onrushing Army keeper, the Spaniard slotted home with ice running through his veins.

In the 59th minute, Devendra made it 2-0 for the Gaurs after Romario Jesuraj had found him inside the box with a great delivery.

It was one of those days for Army Green, when they could have done everything they would have wanted to except for scoring. Ten minutes later, forward Lallawmkima had the best chance of the game when the ball landed at his feet following a comedy of errors inside the Goa box. He had all the time in the world to settle himself, which he did and when it was time for him to take the shot, he tried to be too cheeky by taking an extra touch and going around the keeper.

However, Naveen Kumar preserved his clean-sheet by making a fine save. Kima infact, had a couple of chances in the game from where he could have scored but it was not to be for Army Green.

Speaking of fine saves, Army Green custodian Sarath Narayanan produced a couple of blinding saves to keep his side in the game until the very end. He kept out a header from point-blank range to deny Goa defender Lalhmangaihsanga (Papuia) in the 72nd minute before making another excellent save to keep out a long-range swerving attempt from Alexander Romario Jesuraj.

For his goalkeeping heroics, Narayanan was rightly adjudged to be the Man of the Match. Speaking after the game, the Army Green goalkeeper said, “Our opponents FC Goa were the better side, tactically and technically. They have better facilities than us.

“Our boys still gave a good fight, which is a big achievement in itself. We will try to improve on this result and win the other two games that we have.”