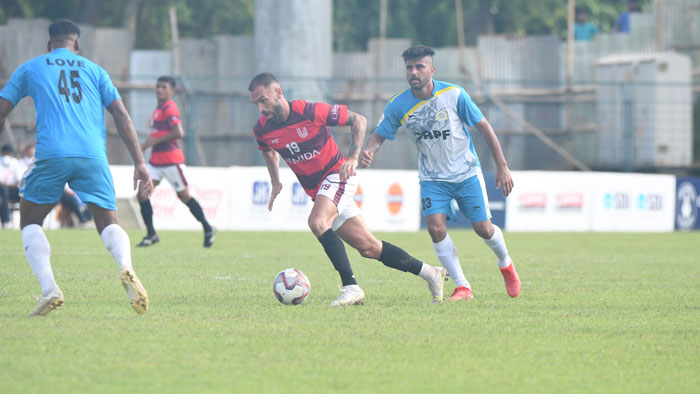 Second division side FC Bengaluru United registered a maiden Durand Cup win on debut, when they outplayed CRPF 1-0 with the help of a Pedro Manzi second half strike at the Kalyani stadium on Monday afternoon. The Richard Hood coached side, staved off a gritty display by the Central Reserve Policemen, particularly in the first-half, to come up trumps and thereby take second place behind Mohammedan Sporting in Group A of the 130th edition of the iconic football tournament.

CRPF began growing into the game in the first half, thanks in particular to a fine display by midfielder Dashpreet Singh, although Manzi had an early sight at goal. CRPF had as many as five corners in the half and came close to scoring a couple of times, but their forwards Amit Gayen and Ramesh Dolai could not capitalise.

The team from the South in Red and Black stripes finally went ahead in the 63rd minute when Manzi finally converted. He had earlier missed a couple of more chances in the first half and had hit the crossbar from a free-kick just minutes ahead of the goal.

Whatever hopes CRPF had of staging a comeback was dealt a stealth blow in the 27th minute of the second half, when just before the hydration break, their keeper Moses Antony was sent-off by referee Rahul Gupta for a handball just outside the box. He was immediately replaced by reserve keeper Shakti Das, but it was still an uphill task for the 10-man CRPF side.

The policemen still fought on gamely with a Rajinder, who also had a good game incidentaly, effort from just outside the box, five minutes from close, missing the target and failing to trouble Bengaluru keeper Kunzang Bhutia. He also hit the crossbar in the dying minutes but still could not get the equaliser.

Pedro Manzi was deservedly declared the Man of the Match for the game.

Speaking after the game Manzi said, “I arrived just two weeks before in India and I am happy to score the first goal for the team in their first Durand Cup appearance. I am loving my stay and the team and the owners, officials all have treated me like family.”

The vanquished CRPF coach Dayal Singh Bhati hoped for a better show in the next game saying, “we had a few chances in the first half and then in the second half some decisions influenced the outcome. But I am happy with the performance as Bengaluru are a good team and we fought very well.”

FC Bengaluru United Head Coach Richard Hood also spoke after the game saying, “We are happy with the three points as that was the target and we hope to pickup nine points and make it through. The conditions are very different in Bengaluru but as professionals we are used to adjust to all conditions and have settled down well.”