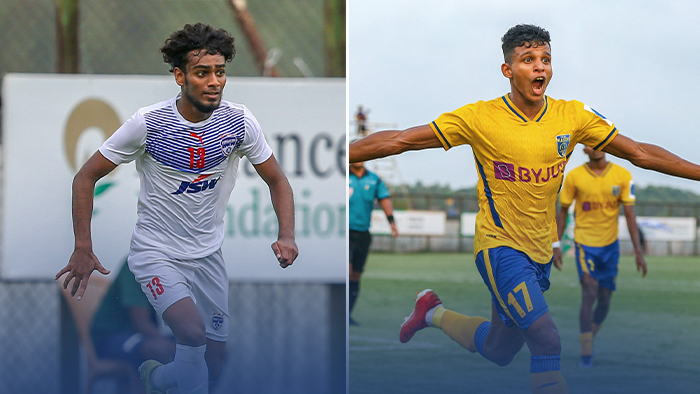 Bengaluru FC and Kerala Blasters FC’s reserve teams managed to gain invaluable experience against Premier League opponents in the semi-finals of the Next Generation Cup, 2022 in the United Kingdom on Wednesday.

Kerala Blasters featuring in the London leg of the tournament lost 0-7 to Tottenham Hotspur while Bengaluru FC went down 3-6 against Leicester City in the Midlands leg.

The Blues shipped six goals against the Foxes in the first hour but soon found their feet to give Leicester City a bit of a scare as they scored three quickfire goals in the second half.

The first opening of the match at the Leicester City Academy Ground on Wednesday fell to the Indian side as Bekey Oram won the ball high up the field in the 5th minute but his attempt on goal was off target.

The early scare woke up the Foxes as they upped the tempo and broke the deadlock in the 13th minute when Kian Pennant scored at the end of a fine move.

William Alves then doubled the lead as Leicester City pounced on some sloppy play from the Blues to make it 2-0 in the 18th minute.

Chris Popov then added a third for Leicester City before Pennant struck again to make it 4-0 inside the first half an hour.

The Blues goalkeeper Sharon Padattil was kept busy and he made a top save to deny the Foxes a fifth before half-time.

However, the English side continued their onslaught after the break as Popov scored his second to make it 5-0 seven minutes into the second half before completing his hat-trick on the hour mark as the Foxes scored a sixth goal.

Bengaluru FC though sprung into life after the hour mark as Sivasakthi Narayanan got his team on the scoresheet after tapping home a rebound in the 67th minute.

Two minutes later, the Blues scored again through Damaitphang Lyngdoh as he brilliantly found the bottom corner with a well-taken finish.

Sivasakthi then scored a beauty for his second goal of the evening and made it 6-3 in the 73rd minute to bring the Indian side back in the game.

Leicester City then regained control of the match and won a penalty in the 82nd minute but Bengaluru FC goalkeeper Deepesh Chauhan produced a double save to keep the score at 6-3.

The Blues tried to further cut the deficit but Leicester City held on to claim the win.

Bengaluru FC will now fight for third place against Nottingham Forest in the Midlands leg on Saturday.

FULL-TIME: A strong second half performance from @bengalurufc but @LCFC are through to the finals of the #PLNextGen Midlands Group 🦊 pic.twitter.com/iO4n3VBwQd

Kerala Blasters FC endured a difficult afternoon as they lost 0-7 to Tottenham Hotspur in the second semi-final of London leg of the Next Gen Cup 2022 at the Tottenham Hotspur Academy Ground in London on Wednesday.

The English side got off to a fast start and started putting pressure on Kerala Blasters FC right from the kick-off.

However, Tomasz Tchorz’s men were able to create an opening and got their first big chance after the Spurs’ goalkeeper’s faulty pass was intercepted by Ajsal, but the latter failed to make a quick decision in the attacking third as the Blasters were dispossessed in a very encouraging position.

Tottenham Hotspur continued to be the dominant side, pulling strings and having a lion’s share of the possession.

Spurs drew first blood in the 31st minute after a save from Sachin Suresh fell onto Jahziah Linton who made no mistake and fired it down the middle.

The English side had breathing space as they slotted another one as Riley Owen found Jaden Williams through a lofted pass in the box, with the latter latching it into the bottom corner of the net to make it 2-0 for his side.

Tottenham Hotspur went into the break with the two-goal cushion intact.

Spurs fired off a great second half as Max McKnight made it three. The full-back was left unmarked after a threaded pass from Owen and he made no mistake in finding the net.

In the 60th minute, Kerala Blasters FC had their best chance of the match after a brilliant one-two between Jeakson Singh and Givson Singh found the latter in a shooting position but his shot went narrowly above the bar.

A minute later, Spurs fired their fourth from a brilliant counter-attack through Tom Bloxham.

In the 73rd minute, George Abbott skillfully got past two defenders and passed to his man on the left. Receiving the ball on the run, the attackers netted in the right corner to make it five for Spurs.

Then, Williams scored his side’s sixth from the penalty spot after he was brought down by Bijoy Varghese.

In the closing stages of the game, Williams completed his hat-trick after dribbling past three players and shooting into the far post from his weaker foot to make it seven.

Kerala Blasters FC will now fight for third place against Crystal Palace in the London leg of the event.