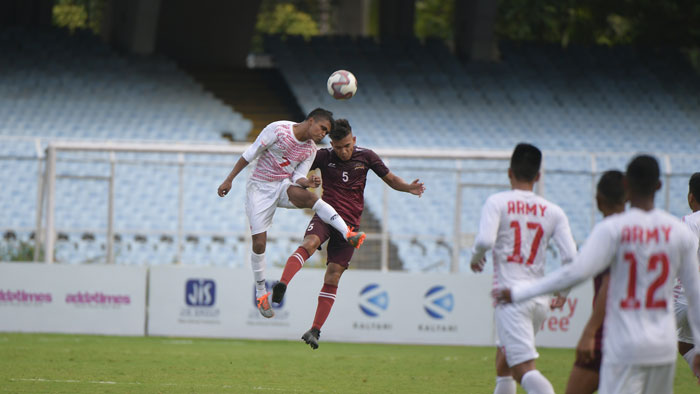 This was also the first all regimental affair in this edition of the Durand Cup. The two military teams have been drawn in Group D alongside Gokulam Kerala FC and Hyderabad FC.

Liton Shil, Bikash Thapa, Sushil Shah and the captain Nongmeikapam Suresh were the heroes who scored for Army Red while Samujal Rabha scored the solitary goal for Assam Rifles.

Assam Rifles were coming to the tournament fully pumped up, after winning the Assam Rifles Invitational Cup earlier this year, whereas the Army Reds were playing their first official competition in two years. However, Army Red were clearly the more dominant side in the first half, asking questions in the Assam rifles goal box every now and then.

Both teams got opportunities, but Army Red clearly looked more threatening. They were the first to score as well when a brilliant cross from left flank by Jain P was given a fine touch by Liton Shil in the 39th minute to score the first game of the match.

However, Samujal Rabha quickly scored the equalizer for Assam Rifles, thanks to lack of communication between the keeper and defender in the Army Red goalbox to go 1-1 in half time.

Post half time, it was a completely different story with the Army Red side giving so chance whatsoever scoring 3 goals in quick succession.

In the 66th minute, Bikash Thapa, who was trying hard all afternoon, collected a loose ball and smashed it in the goal to give Army Red the lead. Shortly after, Sushil Shah scored another one, via a penalty. Army Red’s Captain Nongmeikapam Suresh Meitei hit the final nail in the coffin, hitting a super free kick to score the 4th and final goal for his team.

Bikash Thapa who was adjudged the Man of the Match said, “This is just the start and our first match. It was a learning opportunity for us and the next two matches are very vital. It was very important to win this match.”

It will be another double header tomorrow with CRPF taking on Mohammedan Sporting Club in a Group A encounter whereas Jamshedpur FC will lock horns with Army Green Football Team in Group B.