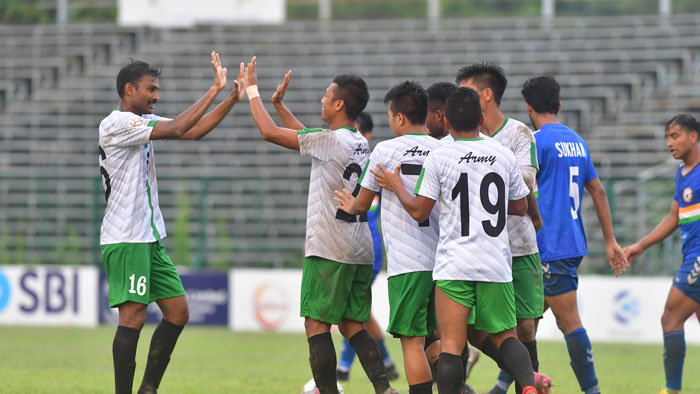 Former champions Army Green came off 1-0 winners against Ileague side Sudeva Delhi FC to storm through to the quarterfinals of the 130th Durand Cup. Deepak Singh, their two-goal hero from their 3-1 win against Jamshedpur FC (JFC) earlier in the tournament, was on target again to see the Greens through.

The two sides clashed at the Mohun Bagan ground in Kolkata on Friday, September 17, 2021, in the final game of Group B, with both of them as well as JFC, also playing their final game simultaneously against FC Goa at the Vivekananda Yuba Bharati Krirangan (VYBK), having a shot at the knockout stages.

JFC however went down 0-5 in that game, allowing Army Green to go through along with group toppers FC Goa, who had three wins out of three.

In the initial quarter of the first half, both Army Green and Sudeva created opportunities but it was all Greens after that. In the 9th minute, the Greens had their first major scoring opportunity when Lallawmkima took a brilliant header, but could not go past Sudeva keeper Sachin Jha. Shubham Rana took another shot at goal on the rebound, but Sachin came up with another brilliant save.

The ball hovered around the Sudeva goal for most part of the first half. Thirty minutes into the game, two back-to-back corners almost got the Greens on the board, but Sachin made sure it was goalless at half time.

Sudeva looked all charged up in the second half however. In the 46th minute, William Pauliankhum had the ball just a few yards away from the goal but failed to score.

Army Green came back strong and in the 51st minute courtesy a nice set up and a wonderful assist by Dip Mazumdar, Deepak tapped the ball into the net.

The Delhi side did have a few chances to equalize but they could not go past Army Green’s defence to end the campaign with three losses.

Deepak Singh was rightly adjudged the Man of the Match.