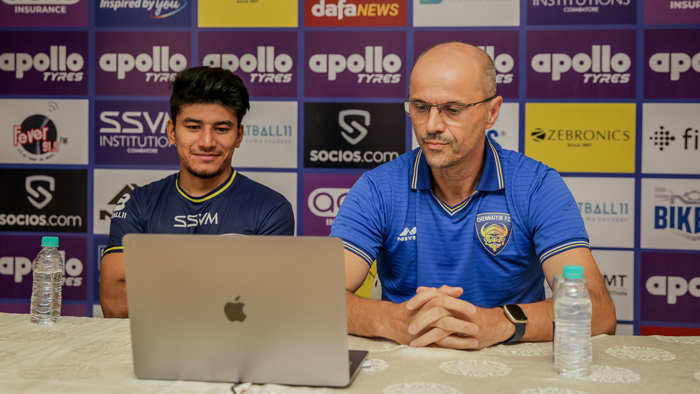 Aiming to clinch the coveted trophy for the third time, revamped Chennaiyin FC will kickstart their 2021-22 Hero Indian Super League campaign against Hyderabad FC at the Athletic Stadium in Bambolim on Tuesday.

Under the new head coach Bozidar Bandovic, the two-time champions have built a strong squad which consist of experienced as well as youth players and provides a good balance in the team.

Chennaiyin FC have also spent quality time in their pre-season training camp, playing five friendly fixtures, which allowed them necessary momentum ahead of their first game and the coach is confident that the club is well-prepared. However, aware about the strong competition in the league, the 52-year-old Montenegrin wants his players to focus on one game at a time.

“I want to talk about game by game. So, for us it’s important (to focus) on the first game and then we can think about the next ones. We will try to go game by game and try to be in the top four,” Bandovic said while addressing the media during the team’s virtual pre-match press conference on Monday.

Midfielders Rafael Crivellaro and Germanpreet Singh will not be available for the season’s opener due to injuries.

Talking about Tuesday’s game and HFC’s experienced line-up, Bandovic said: “There are good players in Hyderabad FC and they have experience of playing in the league. But we will try to use our strengths and take advantage of their weaknesses. We hope that we’re going to play a good game (tomorrow). We need to defend well and also need to attack [in order to] score goals. We will be preparing for tomorrow’s game and we are ready.”

Newly-appointed skipper Anirudh Thapa, who will be leading Marina Machans for the first time in India’s premier football league, felt that things haven’t changed for him as he is surrounded by senior players who have been helping him to improve, earlier as a player and now as a captain.

“We have many experienced players, they guide me. It’s nothing new to me, you know, before that also, there were senior players who used to guide me as a player. This season also, in terms of Narayan Bhai [Narayan Das] or the foreigner players, they have been helping me and others to improve so that collectively the team grows and we do well,” Thapa concluded.