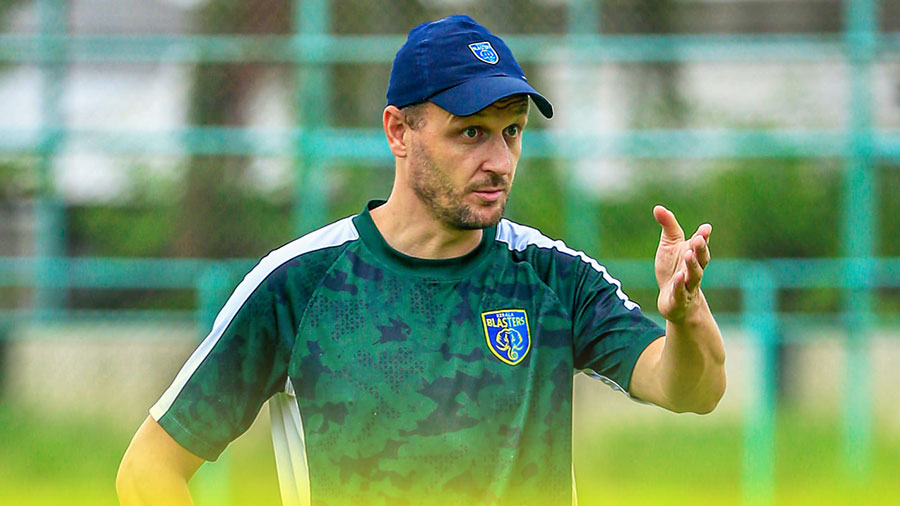 Second-placed Kerala Blasters FC will face Odisha FC at Tilak Maidan tomorrow. The Blasters will be hoping for a win to solidify their position on the table, while Odisha FC will be looking for nothing less than a win to climb back into the top four race. Head coach Ivan Vukomanovic and defender Nishu Kumar attended the virtual press conference ahead of tomorrow’s game.

Kerala Blasters have gone undefeated in their previous nine games, the longest streak in the league. Coach Vukomanovic discussed how he accomplished this feat as well as how he turned KBFC, a squad that had been written off after the first game, into title contenders.

“Since we started we’ve always believed that we have the quality to beat anybody. If we look at the other teams in the league, many times the favorites couldn’t win or collect points in so-called easy games. In our case, in the game against ATKMB, we were playing a good game but we conceded an early goal which was from an offside position then later we were denied a penalty. Not only looking at us but I think if there had been VAR technology in this league we would have seen a completely different table because there were so many moments in which the results were not how it was supposed to be. We’ve always believed that we could build up a momentum and good atmosphere. We have a good team with good players who are working hard and we believed from the beginning that we could turn things around in our favor. Then when we started collecting points we just went with that flow. This league is short and we have to be ready to play many games in a short period.”

Defender Harmanjot Khabra received an unpleasant kick on his calf in the last game. Vukomanovic provided updates on Khabra and also a team news update, “Khabra is alright. He has recovered and is available for tomorrow’s match like everyone else except Jessel who is out due to a shoulder injury.”

KBFC boss also discussed his team’s gameplay, winning second balls and praised his players for delivering what’s required, “In every game, there are many duels and second balls are important to have balance in the game. In some games, you will have it under control and in others, it will be difficult because all teams fight to have that balance. I have to praise our team because so far we are a team that conceded the least goals and also the team that scored the most goals from open play. We are working on things considering our team structure and players’ profile. We are trying to do our best and we are happy with our players and the way they are delivering.”

Due to the unfortunate incidence of some players testing positive for COVID-19, the ATKMB VS Odisha FC game was postponed. Ivan Vukomanovic discussed the covid positive cases and the prospect of the league being suspended.

“Our last opponent Hyderabad FC played against ATKMB who are in quarantine now. This is like a chain now, Hyderabad FC are involved because they faced ATKMB and we are involved because we faced Hyderabad FC and now more teams will be involved. I hope there won’t be any new cases but with these things going on I’m afraid that we will be seeing difficult situations. From today they started testing us every twelve hours because we were in contact with Hyderabad FC (ATKMB’s last opponent). Hopefully, the ISL will have it under control and will continue the league till the end if not it will be a shame to stop the league in the middle of a season.”

Vukomanovic was asked if we could expect any surprises in tomorrow’s match against Odisha FC as they are a well-known opponent. He said, “All teams have faced each other once so I think there will not be any more surprises in this league. Now it’s about commitment to the game, good character, being concentrated, and using the qualities and strong points you have. Our goal for tomorrow is to play a strong game, be organized, press them with quality, and in moments when we have to defend to be compact and organized. I don’t expect anything special, I hope it will be an interesting game and let the better team win.”

Nishu Kumar spoke about his comeback after missing much of the previous season due to injury, “Injury is a part of football, every player will have to deal with it. I am happy now that I am back. I am fully fit now.”

Nishu also discussed the differences between this season’s blasters and prior seasons’ blasters, “We started our pre-season very early. We are a team now and everyone is happy and is enjoying the football. We’ve fixed the problems we were having in the past years. Some experienced players were signed before we were a young team. All this has helped the team.”

Among the other players that are quite young and inexperienced are Harmanjot Khabra and Jessel Carneiro, the two senior Indian players. Nishu emphasizes the importance of learning from them.

“I’ve played with Khabra for almost five years and Jessel is an experienced player. Khabra is a person with a strong mentality, he talks to us and helps us improve both physically and mentally. As young players, we have to learn from them.”