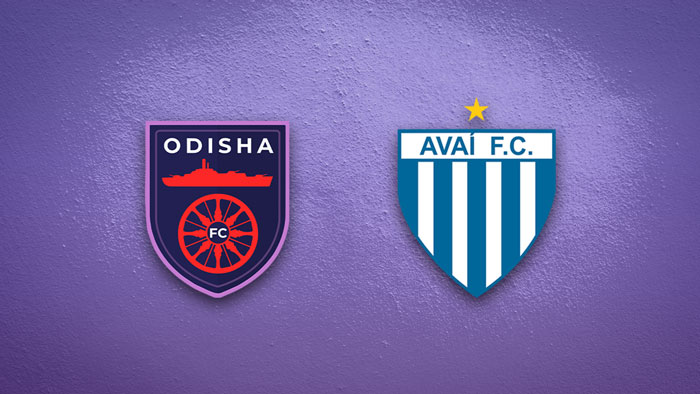 Odisha FC has announced the finalisation of a strategic football and commercial partnership with Brazil’s Avaí Futebol Clube as a part of OFC’s Global Football Alliance initiative. This pioneering relationship marks the club’s and country’s first partnership with a Brazilian football club.

This historic tie will bring many benefits and opportunities to both the clubs and the countries. The primary objective is to strengthen footballing and commercial relationships in order to have mutual gains in their sporting and wider activities.

The partnership further expands Odisha FC’s global presence and focuses on developing players and commercial opportunities on a domestic and international stage. Avaí Futebol Clube, is a Brazilan football team from Florianopolis in Santa Catarina. Renowned for a strong Academy with many players playing for the national team and focus on youth development, the history of the Club dates back almost a century.

Odisha FC club President Mr. Raj Athwal said, “We are delighted and proud to announce our partnership with Avaí Futebol Clube – a club with great tradition and history. Our first partnership in the South American continent brings many opportunities for both clubs’ to learn from each other, but also strengthen the bond between the two countries. Avai FC who currently plays in the First Division of Brazilian football can support us with the development of youth players, the academy in Odisha but also allow us to provide the very best in business and commercial strategies on which we’ll conceive, design and implement for the benefit of both the clubs’ and their respective states.”

Mr. R Vineel Krishna IAS, Commissioner-cum-secretary, Sports and Youth Services Department, Government of Odisha expressed, “Brazil is a powerhouse in football. We are quite excited about the partnership between Odisha FC and Avai FC. I am sure that, in the coming years, this partnership will help the footballers from Odisha to enhance their skills. Odisha will provide all support for the partnership to be successful.”

On behalf of DV7 Group, OFC’s Managing Partner of Global Football Operations, its president, Mr. David Villa and CEO, Mr. Víctor Oñate, asserted, “Brazil is the number one country in the world exporting football players to the global market. For Odisha FC, the agreement with Avaí Futebol Clube generates great access to this unlimited source of talent, specially with the background of Avaí in developing youth players. Also, is an opportunity for the technical staff of both clubs to exchange football knowledge and applicate it to the teams.”

The relationship involves sharing of technical information, working with basic categories, training and even the exchange of players. This partnership will put all professionals from Avaí’s technical committee and from the youth categories available for the development of football in Odisha.

Avaí has a strong history in all youth categories, it is a training club recognized by the Brazilian Football Confederation (CBF), with the revelation of talents for the main and international team, which can help in this process.

We are pleased to announce the finalisation of a strategic football and commercial partnership with Brazil's Avaí Futebol Clube (@AvaiFC) as a part of OFC's Global Football Alliance initiative.

Avai Head coach Claudinei Oliveira, who has already participated in a video conference with the technical managers of Odisha, will also be able to help with his experience, knowledge and ideas. Claudinei spoke with Francisco “Kiko” Ramírez González, the current coach of Odisha FC, a former professional athlete, from Spain, about the development of the joint work. The understanding between the two was stimulating for the partnership.

Avaí FC President Francisco José Battistotti highlighted the importance of this partnership, for raising Avaí to a level of international exchange, in a continent where football seeks its development. “There are global opportunities at stake for this work of exchange, of building new ideas and advances in all areas of football. We hope to learn from new visions and also lend some of our knowledge to football management,” he said.

Growth opportunities in business and commercial prospects will be a key development driver. Both countries have long-standing trade associations and parallels. This symbiotic relationship is a key factor both clubs wish to pursue through their existing business relations in each country and respective states. A long-term strategic plan is being constructed to use the power of football in connecting companies and institutions in both continents to the betterment of trade and educational associations.